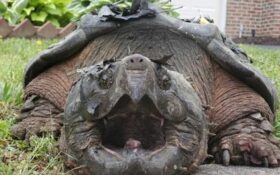 A 65-pound (29-kilogram) alligator snapping turtle with a face only its mother could love has found a new home at a Virginia zoo after freaking out residents in a northern Virginia suburb.

The turtle, dubbed Lord Fairfax, was repeatedly crossing a residential road in the Alexandria area, according to Fairfax County Police. Not native to the area, the alligator snapping turtle is generally found in the wild farther south.

Animal control officers initially took Lord Fairfax to the county animal shelter, and then to the state Department of Game and Inland Fisheries.

The fisheries folks say the turtle is just a juvenile and could eventually grow as big as 200 pounds (90 kilograms). They say the northern Virginia climate would have been too cold for him to live in the wild.

He will live instead at The Virginia Zoo in Norfolk.

You can see a full-sized image of the behemoth below: