[Photo] This robot car can deliver your groceries! - The Horn News 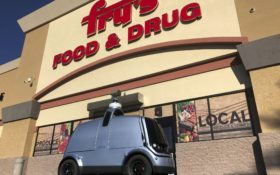 The nation’s largest grocery chain stepped into the driverless delivery market Tuesday, bringing milk, eggs and other items to a customer’s home in a vehicle with nobody at the wheel.

Although limited to delivering within about a mile of one Arizona supermarket owned by Kroger Co., it represents the latest step for industries trying to lower delivery costs of everyday items and those trying to launch self-driving cars on public roads.

Tuesday’s delivery arrived at Shannon Baggett’s house in the Phoenix suburb of Scottsdale. She was already receiving groceries weekly from larger, manned self-driving vehicles that the company Nuro developed and launched in August. She said it was surreal to see nobody in the car bringing her milk, eggs and strawberries.

“It was very cool to see it pull up. It was a lot smaller than I thought it would be,” Baggett said. “I told my husband, ‘We just got our groceries delivered by a robot.’”

But Tuesday’s launch also highlighted some of the many challenges still ahead for autonomous vehicles: One of the compact cars didn’t drive as planned at a media demonstration because of a dead battery and had to be pushed up a ramp and onto a truck by several men. 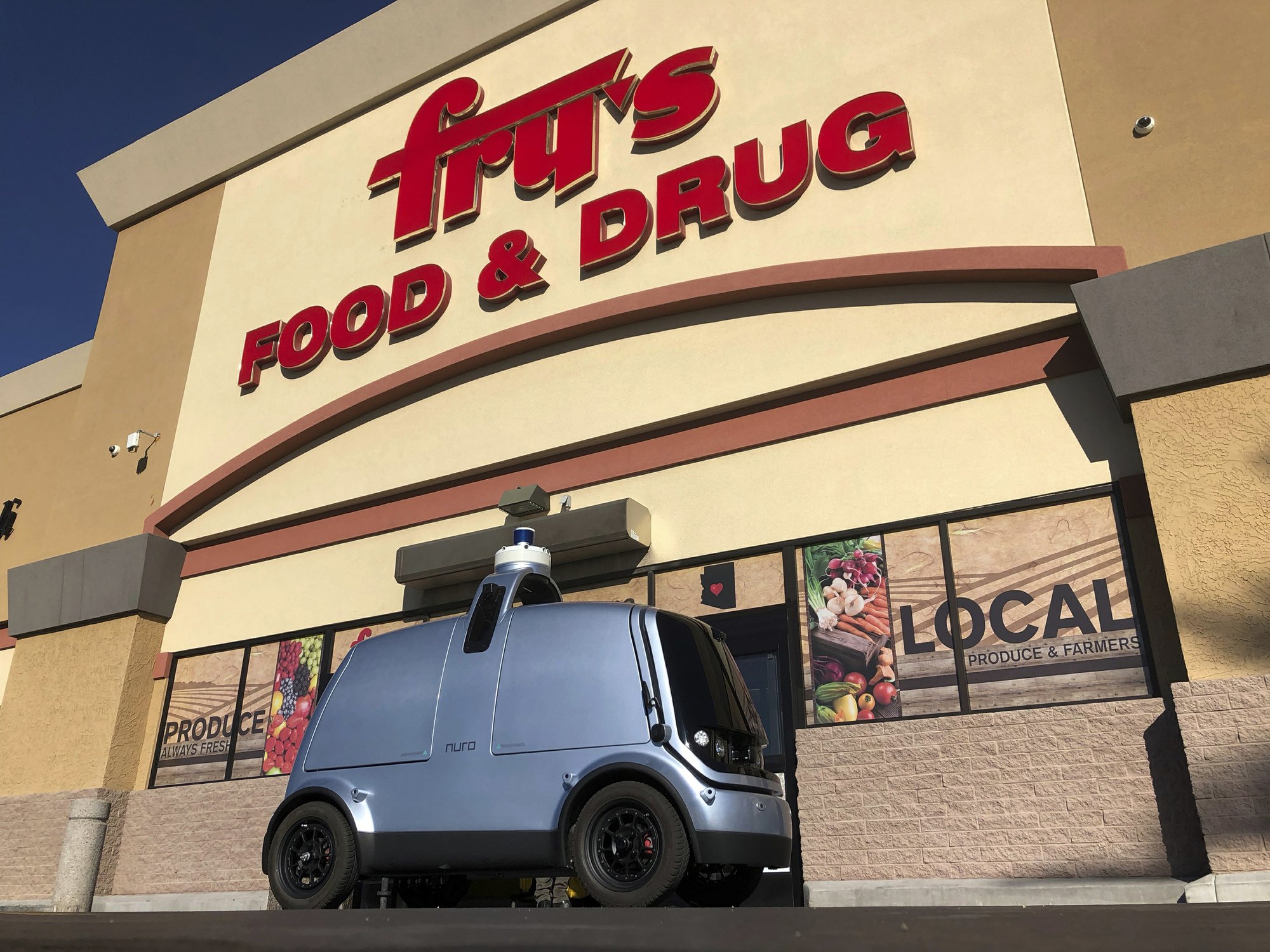 Kroger and Nuro, which is based in Mountain View, California, announced Tuesday that they would deliver groceries in the Scottsdale area, using an autonomous vehicle called the R1, which has no steering wheel and no seats for people.

Nuro will be adding two of its completely unmanned R1 vehicles to its fleet of manned self-driving vehicles that deliver groceries, said Dave Ferguson, president and co-founder of Nuro.

When summoned, the R1 will travel within a 1-mile radius of the Fry’s Food store just east of the Phoenix Zoo at speeds up to 25 miles per hour (40 kph) on residential roads but stay clear of main roads or highways, according to Pam Giannonatti, corporate affairs manager at Cincinnati-based Kroger’s Fry’s division.

Customers place an order on their smartphone or laptop and get a text message when the groceries are on their way. Another message will alert them when the delivery is curbside. Once the vehicle arrives, the customer will receive a code to punch in to open the doors, Giannonatti said.

Customers will pay a flat fee of $5.95 and can request same-day or next-day delivery.

The unmanned delivery vehicles will be followed by a “shadow car,” driven by a person with the ability to stop or control it. This car is being used in the early stages of the program out of caution and will be phased out, Ferguson said.

“This is not yet at the point where in any way it’s economically better than just sending someone out in a car to deliver your groceries,” said Bryant Walker Smith, a professor at the University of South Carolina, who teaches about emerging technologies. “It will probably cost much more, and the range is minimal, and there are lots of ways it would not be a true, commercial-scale, viable deployment, but it’s an important step on that path.”

Uber pulled its self-driving cars out of Arizona this year after one of the ride-hailing service’s robotic vehicles hit and killed a woman as she crossed a darkened street in a Phoenix suburb in March. It was the first death involving a fully autonomous vehicle. A backup driver was at the wheel.

Waymo, a self-driving car spinoff from a Google project, has been offering free rides in robotic vehicles with no backup driver as part of a test program in the Phoenix area for the past year. Earlier this month, Waymo launched a ride-hailing service available to about 200 people that will have a person behind the wheel in case something goes awry.

Giannonatti of Kroger said safety is paramount in this next step of autonomous vehicle technology.

Because Nuro’s R1 delivery vehicle is unmanned, it was designed to prioritize safety of other drivers and pedestrians without trading off the safety or comfort of a driver or passengers, Ferguson said.

The vehicle’s size — half the width of a Toyota Corolla — also helps prevent collisions with pedestrians because there’s more buffer room, he said.

Kroger has been working to boost online sales to keep up with Walmart and Amazon, which bought grocer Whole Foods last year.

“But ultimately,” he says, “there are so many challenges with autonomous vehicles” to make it a reality nationwide.

Among them: state laws and weather. Arizona’s laws have been friendlier to self-driving vehicles, and the weather in Scottsdale is more predictable than in other parts of the country.