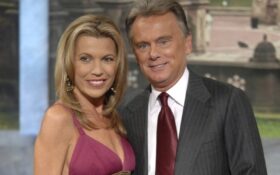 When Wheel of Fortune star Pat Sajek isn’t hosting the popular television game show, he is an outspoken conservative.

When he posed for a picture with far-right Rep. Majorie Taylor Green, R-S.C., and Right Side Broadcast News reporter Bryan Glenn, it caused a liberal meltdown.

Sajek was called every name in the book.

Newsweek said the game show how was “posing with Nazis.”

“Wheel of Fortune host Pat Sajak should explain why he took a picture with Marjorie Taylor Greene. If she came up to him in a restaurant and asked for a picture and he was being polite, that’s one thing. But if he actually supports the objectively evil Greene, he has to be fired,” the far-left Palmer Report wrote.

“I guess we can add the name Pat Sajak to the list of batshit crazy trumper B-list celebs along with James Woods, Jon Voight, Kirstie Alley, Kevin Sorbo, Chuck Woolery and Chachi,” wrote a user.

Some conservatives fired back —

So the left is in an uproar because Pat Sajak posed with Republicans when everyone knows he's a conservative? They can replace him with Biden who will host Wheel Of Misfortune!

So what was the picture that caused such a huge reaction?