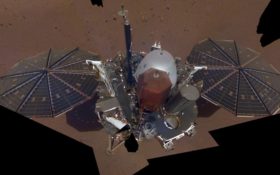 NASA’s new Mars lander has taken a selfie from above, using a camera on its long robotic arm.

The InSight lander snapped a series of pictures that NASA turned into a stunning mosaic, released Tuesday.

InSight landed on Mars on Nov. 26. In the two weeks since, scientists are thrilled to find the area in front of the spacecraft pretty much free of rocks, hills and holes.

That should make it a safe place for InSight’s two geology experiments, which will be moved to the ground in the coming weeks.

Lead scientist Bruce Banerdt of NASA’s Jet Propulsion Laboratory says the red sandy expanse might seem “pretty plain” — if it weren’t on Mars. He notes, “We’re glad to see that.”