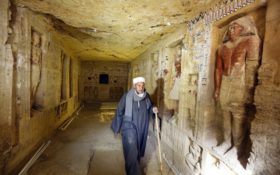 Egypt on Saturday announced the discovery of a private tomb belonging to a senior official from the 5th dynasty of the pharaohs, which ruled roughly 4,400 years ago.

Antiquities Minister Khaled al-Anani announced the find at the site of the tomb in Saqqara, just west of Cairo, which is also home to the famed Step Pyramid.

He said drawings on the tomb’s walls were “exceptionally well-preserved.” The drawings depicted the official and his family, he added.

The tomb also contained a total of 45 statues carved in rock. Again, they depict the official and his family.

In recent years, Egypt has heavily promoted new archaeological finds to international media and diplomats in the hope of attracting more tourists to the country. The vital tourism sector has suffered from the years of political turmoil and violence that followed a 2011 uprising that toppled autocrat Hosni Mubarak.