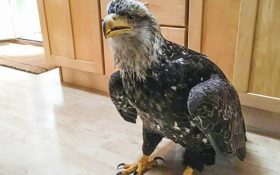 Many are familiar with uninvited guests unexpectedly crashing at the house, but an eagle took such a scenario to new heights in Kodiak.

An eagle grabbed a piece of freezer-burned halibut that someone had thrown out, and apparently misjudged its climb up a cliff with the 4-pound (1.8-kilogram) piece of fish while likely being chased by another eagle, the Kodiak Daily Mirror reported Tuesday.

The wrong trajectory led the eagle to smash through a front window of Stacy Studebaker’s home Saturday.

“It was so unbelievably loud. My first thought was: I thought an atomic bomb had dropped and the windows were blowing out,” said Studebaker, who founded the local chapter of the Audubon Society.

She was astonished to find the damage came from a bird crashing through her window.

“I ran around the corner and here was this eagle, in the living room,” Studebaker said. “Shards of glass were flying everywhere, and the eagle flew over to the other plate glass window and was trying to get out. It was scratching at the window sill and pecking . it was just frantic.”

She opened a door in the kitchen and tried to coax the eagle out of the house but the bird had a different idea.

“It went into the kitchen, along with its 8-foot (2.4-meter) wingspan — we’re talking stuff coming off the walls, everything coming off the counters, it was just mayhem,” she said.

A neighbor showed up, and they tried again to get the eagle outside.

“But it freaked out again and flew into the dining room and there was just stuff flying everywhere — broken glassware, art supplies, you name it. It was still trying to get out through the windows in the dining room,” Studebaker said.

Eventually they maneuvered behind the bird and were able to get it out of the house, which took her and her husband hours to clean up.

“If you could have seen the house, it really looked like a bomb had gone off,” she said. “There was glass that had been thrown into a bookcase that was 25 feet (7.6 meters) away and all over the furniture. The carpet was sparkling with glass.”

She added: “It was like having a wrecking ball coming through your window — with wings!”

Except for some blood around the beak, the eagle didn’t appear to be inured.

She said it’s not uncommon for people to be cleaning out freezers this time of the year, and that’s where the eagle likely found the halibut. Two days later, her suspicions were proven true when someone knocked at her door.

One of her neighbors was standing there with a bouquet of flowers.

The neighbor said, “It was my halibut … I feel so bad,” Studebaker said.

You can look at the full-sized image here: 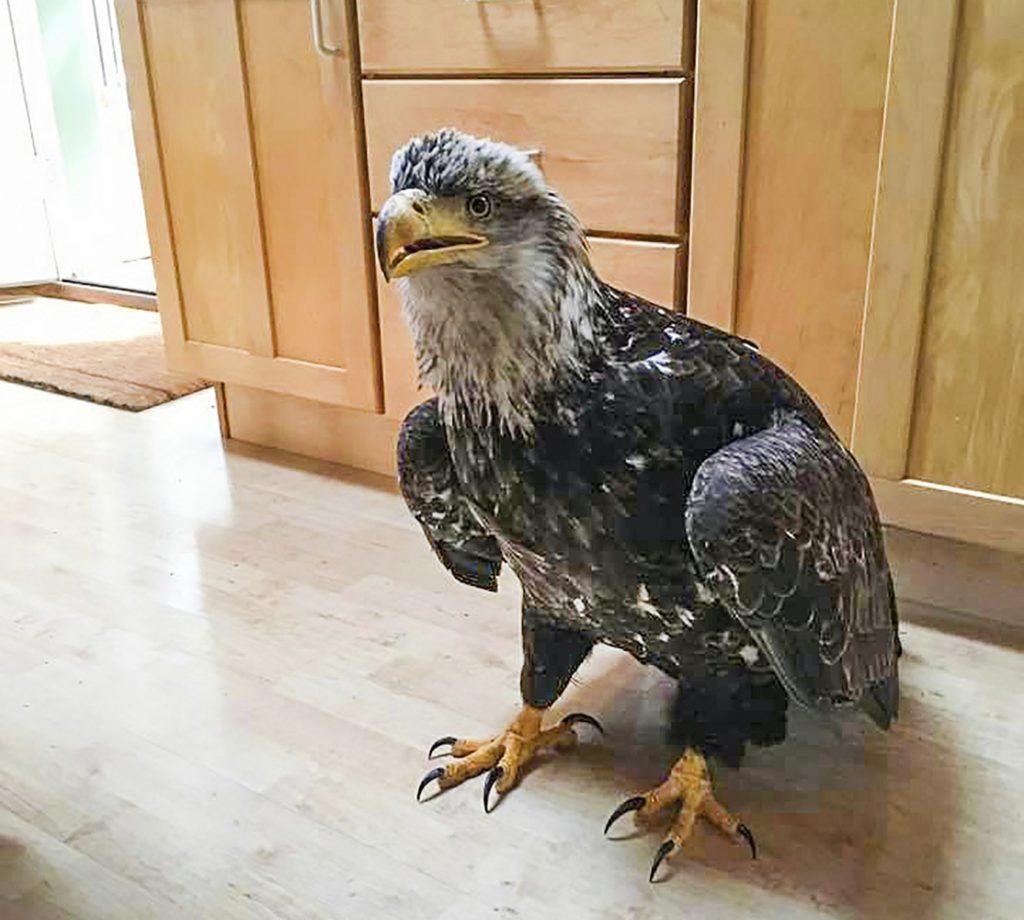