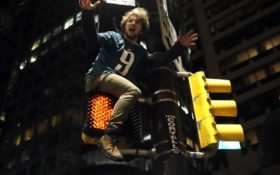 The Philadelphia Eagles’ Super Bowl victory set off a celebration that has been 58 years in the making — and in true Philadelphia fashion, it was a riotous affair.

Nick Foles and the Eagles clinched an upset 41-33 victory over the New England Patriots in Minneapolis for the team’s first Super Bowl title Sunday night. More than 1,000 miles away in Philly, there was pandemonium in the streets.

As time expired, thousands of revelers across the city spilled out of sports bars, apartments and houses.

There were fireworks amid car horns blaring, and rowdy Philadelphians — young and old — descended on Broad Street.

Fans flipped over at least one car —

There was also a group of 30 people standing on top of an awning at the Ritz Carlton.

Things went exactly how one would expect for the rowdy fans —

30 people on this little awning… why not??!? pic.twitter.com/0bqBgYSKcA

Some fans were heard yelling, “Everything is free!” —

People yelling “Everything is free,” looting, trashing this gas station. Damn it, Philly we better than this. pic.twitter.com/WecXaAmrFh

Philly’s just Cleveland without the river that catches on fire pic.twitter.com/v8AYKQ2piy

Philadelphia was left to deal with the cleanup on Monday, after some overzealous fans smashed windows, climbed traffic lights and trashed some convenience stores.

Officials said those transported to hospitals suffered from head injuries, lacerations and alcohol intoxication. Police say those arrested face criminal charges, and if they are students they face punishment under the student code of conduct.

Sam Murphy, 40, actually made the trip from Boston to Philadelphia, flying in Sunday morning before planning to fly back for work Monday. The longtime Eagles fan and Boston resident joked he couldn’t be within 100 miles of his home, instead deciding to watch the game with his old University of Pennsylvania roommate.

“This is Philly at its best,” said Murphy, as he, his former roommate Rob Ballenger, and hundreds of other new friends paraded down South Street to get to the party on Broad. “This team is what Philly is all about.”