Philadelphia sees cheesesteak shop fire after this - The Horn News 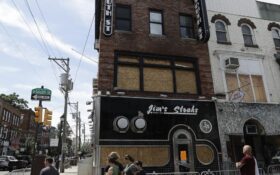 More than 125 firefighters and other emergency responders were called to the blaze Friday morning at Jim’s Steaks on South Street and battled it for more than four hours before bringing it under control.

Officials said all employees were able to safely evacuate, and no injuries were reported.

The Philadelphia Fire Department said Monday that the fire marshal’s office had “determined the cause to be electrical wiring.”

Owner Ken Silver told The Philadelphia Inquirer that the air conditioning had been malfunctioning that morning.

He said city inspectors had pronounced the building structurally sound, and he vowed to rebuild, saying the damage was less than he initially feared.

Jim’s Steaks opened its original location in Philadelphia in 1939. The South Street location opened in 1976.