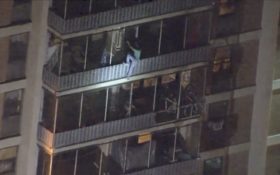 A man scaled several floors down the side of a 19-story building in Philadelphia to escape a fire that injured four residents and three police officers — and video of the scary climb quickly went viral.

The fire at the Holden Tower apparently began in a trash chute about 9:30 p.m. Thursday, causing flames to shoot out and spread heavy smoke to all floors of the high-rise.

Firefighters soon responded and took a water line to the fourth-floor chute and flooded it. They also stretched the line to the 15th floor and flooded the trash chute from there as an extra safety measure, authorities said.

The firefighters had the blaze under control in about an hour. All residents were able to escape the building — some who have mobility issues were carried out by other residents.

Emergency responders also went to some individual units to ensure residents there had gotten out safely. In some cases, they made forced entry to the units.

SEPTA provided several buses to give residents a cool place to stay on a hot and humid evening while firefighters worked to extinguish the blaze, officials said. Residents were allowed to return to the building later in the evening.

The man who scaled down the building did not appear to be injured.

His name and further information about him was not disclosed.

The injured residents and officers were being treated for smoke inhalation and heat exhaustion, authorities said. It wasn’t clear if any had to be hospitalized.

The cause of the fire remains under investigation.

You can watch a video of the daring escape here: