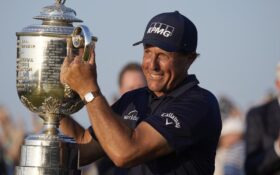 The pandemonium closed in around Phil Mickelson as he walked toward the 18th green at Kiawah Island, where thousands upon thousands of euphoric fans wanted a piece of the history he delivered Sunday in the PGA Championship.

For all the thrills and spills that have defined his 30 years of pure theater, his latest act gave Mickelson his own place in the game.

That final walk toward a two-shot victory was as much stress as he faced over the final hour, and it was a bit scary until Mickelson emerged out of the masses and flashed a thumbs-up.

Mickelson never thought he was too old to win again, much less a major. He just didn’t have much evidence on his side until a remarkable four days at Kiawah Island where he kept his nerve and delivered all the right shots for his sixth major, and by far the most surprising.

He made two early birdies with that magical wedge game that never left him, and then let a cast of challengers fall too far behind to catching him in the shifting wind off the Atlantic.

Mickelson closed with a 1-over 73 to win by two over Brooks Koepka and Louis Oosthuizen.

“One of the moments I’ll cherish my entire life,” Mickelson said. “I don’t know how to describe the feeling of excitement and fulfillment and accomplishment to do something of this magnitude when very few people thought that I could.”

That list didn’t include Mickelson. Never mind that he had not won in more than two years, had not registered a top 20 in nearly nine months and last won a major in 2013 at the British Open.

“This is just an incredible feeling because I believed it was possible, but everything was saying it wasn’t,” Mickelson said.

Julius Boros for 53 years held the distinction of golf’s oldest major champion. He was 48 when he won the 1968 PGA Championship in San Antonio.

The record now belongs to Mickelson, whose legacy is as much rooted in longevity as any of the skills that have made him among the most exciting players in the game.