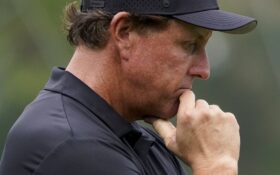 Phil Mickelson’s frustration boiled over Thursday at the U.S. Open — and a hot mic caught him talking to himself.

“I drove it poorly, and I putted poorly,” he said to the press after — a succinct summary of an awful day.

He found a grand total of two fairways over a 5-hour slog through the thick grass, sand, and greens that he couldn’t figure out. He three-putted twice over the final four holes – including once from inside of 9 feet – and finished at 9-over 79, About the only good news to come from it is that there’s no way he’ll have a chance to give away another U.S. Open, the way he did the last time at Winged Foot.

“I’m 9 over,” Mickelson said in discussing his plans for Friday. ”I’ll play as hard as I can and enjoy the round.”

Whenever Mickelson and the fans in New York get together it makes for great theatre, never more than in 2006, when he held a one-shot lead heading to the 18th hole, but hit an errant driver that triggered a chain of events that left Geoff Ogilvy holding the trophy.

There were no fans because of the COVID pandemic that pushed this U.S. Open back three months. But there was no forgetting his history here, either. When he blocked his first tee shot into the left rough, analyst Nick Faldo was blunt: ”There it is, memories of the 18th right there. the same shot.”

He made birdie there and followed with another birdie after another missed fairway on No. 2.

All that scrambling also stirred some memories. Largely forgotten about Mickelson’s fourth round from 2006 was that he hit only two fairways that day, too. But, as he recounted last week, ”It was the best short-game week of my career. I need to strike it better.”

And while Winged Foot wasn’t at its most brutal – Justin Thomas’ 65 was the lowest U.S. Open score ever shot at the course – Mickelson is 50 now, not turning 36, which is where he was in 2006, when he headed to Winged Foot as the reigning champion of both the PGA and the Masters.

He almost didn’t make this return trip. Under the USGA’s traditional format, the top 60 players receive exemptions into the U.S. Open. That was expanded to the top 70 after qualifying was scrapped due to the COVID pandemic. Mickelson, ranked 61st, said he wouldn’t have asked for a special exemption had the standards not changed.

“Look, I’m 50, my career is what it is,” he said in a Golf Channel interview earlier in the week. “It’s fun for me to come back after ’06. It’s a fun opportunity for me to try to add a bonus to my career. That’s kind of how I’m looking at it.”

There was nothing fun about Day 1.

By the time he reached the ninth tee box, he had not hit a fairway, and an NBC graphic cheekily pointed out that he had hit 14,477 tee shots since hitting his last fairway at Winged Foot – in 2006, also on the ninth hole.

He broke the drought there, then promptly headed to the fairway, grabbed a 5-wood and blocked it so far left, it landed on the first tee box.

“I’m so sick of this,” he said as he bent over in disgust.

Things only got worse from there.

You can see the hot mic moment here —