PGA golfer goals: to be "best behaved"... - The Horn News 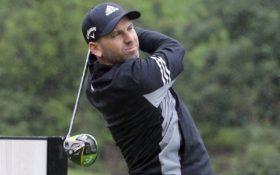 Sergio Garcia apologized in a statement and in person to the players in his group when he damaged five greens at the Saudi International. He apologized in a social media post and in an interview at his locker Wednesday at Riviera.

That has been the easy part. He has had plenty of experience over the years.

Garcia said the challenge now is to make sure it does not happen again, knowing that the scrutiny of his behavior will be greater than ever.

“I’m sure I’m going to hear it throughout the year,” Garcia told The Associated Press in his first interview since he was disqualified Feb. 2 for the damage he did to five greens out of frustration early in the third round.

“My job is to make sure I deal with it the best way possible, and show them that I can grow, that I can move forward and I can be who I am in the right way,” he said. “I want to face my mistakes head on. My job is to go out there and enjoy my game and show everyone that no matter what, I can be the best behaved guy in the classroom. … I just hope I can maintain their respect.”

The Genesis Open is his first event since he lost his head early in the third round at the Saudi International, which he attributed to a personal issue that put him in a bad frame of mind at the start of the week and greens at Royal Greens in Saudi Arabia that were new, grainy and slow.

He did not disclose the personal matter and said it was no excuse, and that he knew immediately he had done wrong.

“It hit me like on the 10th hole. I started thinking: ‘What am I doing? Get your head back on top of your shoulders,’” Garcia said. “I know I lost it.”

The 39-year-old Spaniard has put his emotions on full display since he turned pro in 1999 at age 19, challenged Tiger Woods in the 1999 PGA Championship at Medinah and played in the first of nine Ryder Cups.

There was great passion when he won the Masters in 2017 for his first major. But the explosive, petulant variety has been seen far more often over the years, whether it was kicking a shoe that nearly struck an official at Wentworth in 2000, blaming a European Tour rules official for a two-shot penalty in Australia or accusing Woods of disturbing the gallery at the TPC Sawgrass, a rift that ended with Garcia making a racially insensitive comment about him.

Damaging greens in the middle of a round, which affected the players behind him, caught even his friends by surprise.

“We always think he gets over it, but there’s no doubt he’s out of line behaving like that,” said Adam Scott, one of his closest friends in golf. “He said he needs to understand his emotions and channel that in a better way. I’m not a psychologist and don’t know how to do that, but I think it’s a good thing for him. The game can get the better of us at times. It seems to get the better of him more than some others.”

Garcia’s disqualification — the European Tour said he would not be suspended — ended a streak of seven straight top 10s worldwide, which began when he was picked for the Ryder Cup in France. He went 3-1-0 for the week at Le Golf National.

His game was in good shape. Now he has a reputation to mend.

“I feel terrible about it,” Garcia said. “I’ve been thinking about it for the last week, every day. I’m an emotional player. That emotion is probably my biggest strength, but it’s also one of my biggest flaws. If I channel it the right way, it’s amazing. I think that’s why people follow me the way they do. If I channel it the wrong way, it’s too extreme. My goal is make sure the bad gets better and the good stays.”

Rory McIlroy, another of his close friends, says being Spanish and full of emotion was “no excuse” for what Garcia did in Saudi Arabia.

“It doesn’t matter where you’re from. It’s not acceptable,” McIlroy said. “If you’ve got stuff bothering you, let the course be your sanctuary. I’ve had to deal with that in the past.”

Some of the strongest comments came from three-time major champion Brooks Koepka, who said on “Playing Through Podcast” that the Saudi incident was “Sergio acting like a child.”

“You’re 40 years old, so you’ve got to grow up eventually,” Koepka said.

Garcia pondered what he would say to Koepka when he sees him next week in the Mexico Championship.

“I’m going to tell him I agree,” Garcia said. “I’m the first one to say that I was wrong. I agree with what he said. That’s why we’re here, to get better, to grow up and become better people.”

He paused and smiled before adding: “But I don’t agree with the age. He got my age wrong. I’m 39, not 40. So I have a year to improve,” Garcia said. “But when I see him, I’ll tell him I agree, and I’m sorry for what happened. And I understand why he would say that.”