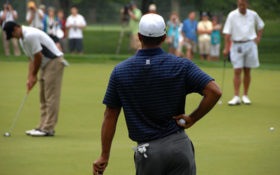 According to New York Post, Polk County Sheriff’s Office announced the details of what it calls “Operation’s Santa’s Naughty List,” and released several videos of men negotiating sexual acts for money with an undercover agent.

Gainey, known by the nickname Tommy “Two Gloves” for his on-the-course trademark look, was videotaped handing over $60 to the undercover agent after he’d requested “just a quick visit.”

And as he handed her the cash, he attempted to set up future rendezvous between the two.

“I’m going to be in town for the rest of the week,” he said, “all the way up until Sunday so.”

According to Polk County Sheriff Grady Judd, Gainey was in town for a charity golf event.

Golf Digest reports that Gainey, who is married, is facing a first-degree misdemeanor solicitation charge.

But he wasn’t the only notable person charged in the bust.

The officer can be seen leading Davis through the house. “Come inside and get warm,” she said.

The officer then proceeds to ask Davis for the money upfront.

“There’s nobody that’s going to run out of the corner — like a cop or anything like that?” he asks as he’s giving her the money.

He would soon find out that the cop was right in front of him all along.