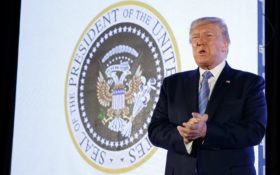 A once-proud Republican in Virginia dismayed by President Donald Trump’s leadership is the creator of a satirical presidential seal that mocked Trump at a young Republicans conference.

The Washington Post reports Richmond graphic designer Charles Leazott created the faux seal. He replaced the American eagle with the two-headed Russian version, gripping a wad of cash and golf clubs. He also replaced “E Pluribus Unum” with a Spanish phrase that translates to “45 is a Puppet.”

Leazott said he was surprised to see Trump standing in front of his creation on Tuesday at a Turning Point USA conference. The White House said it had no idea how it happened. Turning Point later said a staffer searching for the presidential seal online mistakenly grabbed the parody.