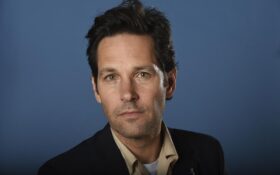 Paul Rudd has been crowned as 2021’s Sexiest Man Alive by People magazine.

Rudd, known for his starring roles in Marvel’s “Ant-Man” films, “This is 40” and “Clueless,” was revealed as this year’s winner Tuesday night on CBS’ ”The Late Show with Stephen Colbert.”

The actor tells the magazine in an issue out Friday that some will be surprised by him receiving the honor.

“I do have an awareness, enough to know that when people hear that I’d be picked for this, they would say, ‘What?’” he said. “This is not false humility. There are so many people that should get this before me.”

But of course, Rudd won’t turn down the honor. He jokingly hopes the new title will grant him an invitation to “those sexy dinners” with George Clooney, Brad Pitt and Michael B. Jordan — all recent winners.

“I figure I’ll be on a lot more yachts,” Rudd said. “I’m excited to expand my yachting life. And I’ll probably try to get better at brooding in really soft light. I like to ponder. I think this is going to help me become more inward and mysterious. And I’m looking forward to that.”

Rudd’s first major breakout performance came in the 1995′s “Clueless,” a cult classic starring Alicia Silverstone. He also made his mark in several comedies such as the “Anchorman” films, “The 40 Year Old Virgin” and “This is 40,” a spin-off from the comedy “Knocked Up.”

The actor reached superstar status in a slew of Marvel superhero films including “Ant-Man,” “Ant-Man and the Wasp,” “Captain America: Civil War” and “Avengers: Endgame.” He’ll star in the upcoming “Ghostbusters: Afterlife” and appear alongside Will Ferrell in the new Apple TV+ series “The Shrink Next Door,” which premieres Nov. 12.

Rudd, 52, said his wife was initially “stupefied” after he told her the news. The couple has two kids, 17-year-old Jack and Darby, who is 12.

“But you know she was very sweet about it,” he said of his wife, Julie, of 18 years. “After some giggling and shock, she said, ‘Oh, they got it right.’ And that was very sweet. She was probably not telling the truth, but what’s she going to say?”

Rudd expects his circle of friends to give him “so much grief.” He won’t blame them, because he would do the same.

“I mean, I’m going to lean into it hard. I’m going to own this,” he said. “I’m not going to try to be like ‘Oh, I’m so modest.’ I’m getting business cards made. But all of my friends will destroy me, and I expect them to, and that’s why they’re my friends.”