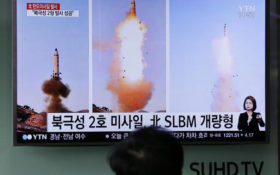 A Pentagon spokesman, Navy Capt. Jeff Davis, told reporters Monday that the U.S. tracked the flight of the missile that was launched on Saturday evening, U.S. time, and assessed that it traveled about 500 kilometers, or about 310 miles, before landing in the Sea of Japan.

Davis said the missile appeared to be a land variant of a submarine-launched ballistic missile known outside of Korea as the KN-11. He said the mobile launcher from which the missile was fired had not previously been seen in public.

Davis said the missile appeared to be powered by solid fuel, which represents a technological advancement from liquid-fuel missiles.