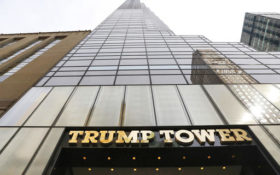 The United States military is looking to rent space at Trump Tower for use when President Donald Trump returns to his longtime home in New York City.

A Pentagon spokesman said Wednesday that the Department of Defense was looking for the space “in order to meet official mission requirements.”

“The Department of Defense is working through appropriate channels and in accordance with all applicable legal requirements in order to acquire a limited amount of leased space in Trump Tower,” said Army Lt. Col. J.B. Brindle. “The space is necessary for the personnel and equipment who will support the POTUS at his residence in the building.”

It was not clear how much it would cost the Pentagon to rent space in the 58-story Midtown Manhattan tower, which is owned by the Trump Organization. Entire floors, which run between 13,000 – 15,000 square feet, cost about $1.5 million a year, according to the building’s website.

Trump has lived in the three-story penthouse for three decades. He has not yet returned to New York since taking office, though his wife Melania and their young son Barron have continued to reside there.

His business is also based in the skyscraper.

It is customary for the military to obtain space near a president’s residence.

Military officers, including those assigned to keep the “nuclear football,” must stay near the commander in chief. The military also rented space near former President Barack Obama’s home in Chicago.

The Secret Service also must have space nearby — and, when needed, have rented from the person they are assigned to protect. The agency rented space on former Vice President Joe Biden’s home in Delaware, though that cost far less than what would be expected for space in Trump Tower. The Secret Service did not immediately respond to a request for comment.