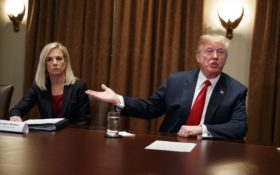 President Donald Trump has asked the Pentagon to plan a grand parade of the U.S. armed forces in Washington this year to celebrate military strength, officials said Tuesday.

The Washington Post, which was first to report the plan, said Trump wants an elaborate parade this year with soldiers marching and tanks rolling, but no date has been selected.

White House Press Secretary Sarah Huckabee Sanders confirmed the request Tuesday evening. She said Trump wants the Pentagon to “explore a celebration” that will allow Americans to show appreciation for the military.

A Pentagon spokesman, Charlie Summers, said Pentagon officials are aware of the request and are “looking at options.”

Muscular military parades of the kind that are common in authoritarian countries like China and North Korea are not quintessentially American. The U.S. traditionally has not embraced showy displays of raw military power, such as North Korea’s parading of ballistic missiles as a claim of international prestige and influence.

U.S. military members commonly participate in parades on the Fourth of July and other holidays to mark appreciation and remembrance of military veterans, but these typically do not include gaudy displays of military hardware.

In her brief comment on Trump’s order to the Pentagon, Sanders did not elaborate on what sort of event he envisions.

Although Defense Secretary Jim Mattis has not commented publicly on the idea of a Washington military parade, the idea is not an obvious fit with his emphasis on focusing strictly, if not exclusively, on military activities that either improve the lethality of the armed forces or enhance their preparation for combat, or both.

The Post reported that the Pentagon would prefer to hold such a parade on Veteran’s Day in November, in part because it would coincide with the 100th anniversary of the victorious end of World War I. It would thus be less directly associated with the president and politics, the Post said.

John Kirby, a retired Navy rear admiral and former spokesman for the State Department and the Pentagon, reposted on Twitter Tuesday night an article he wrote for CNN’s website last summer after Trump mentioned he had been dazzled by the Paris parade. Kirby said a big military parade in Washington is a bad idea.

“First of all, the United States doesn’t need a parade down Pennsylvania or any other avenue to show our military strength,” he wrote. “We do that every day in virtually every clime all over the world.”

It has long been conventional wisdom that the U.S. does not need to boast of its military strength because it already is recognized as the leader of the NATO alliance and a model of military professionalism that countries across the global seek to emulate.

Last September, at a meeting with French President Emmanuel Macron, Trump announced his idea of staging a grand parade of the armed forces in Washington on July 4.

Trump reminisced about watching France’s Bastille Day military parade when he visited Paris in July. He said the two-hour parade was a “tremendous thing for France and for the spirit of France,” and said he wanted one on Pennsylvania Avenue in Washington that would be grander than the one he saw in Paris.