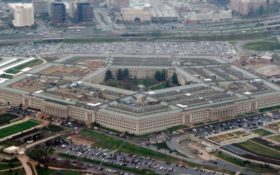 The Pentagon has proof “beyond a reasonable doubt” that advanced Unidentified Flying Objects, flown by aliens, has made contact with planet Earth.

This isn’t the claims of some crackpot, either. This is according to the career intelligence officer that ran the Advanced Aviation Threat Identification Program (AATIP), Luis Elizondo.

According to an interview with The Telegraph, Elizondo was the chief of a real-life X-Files department started in 2007 and funded by Congress with $22 million in “black ops money.”

The existence of the program, which was founded by former Sen. Harry Reid, has recently been confirmed by the U.S. government.

“Luis Elizondo said the existence of supremely advanced unidentified aircraft, using technology that did not belong to any nation, had been ‘proved beyond reasonable doubt’,” The Telegraph reported.

Three months ago, Elizondo was working in an office on the fifth floor of the Pentagon when he abruptly resigned.

“I think it’s pretty clear this is not us, and it’s not anyone else, so one has to ask where they’re from,” Elizondo said. “In my opinion, if this was a court of law, we have reached the point of ‘beyond reasonable doubt’. I hate to use the term UFO, but that’s what we’re looking at.”

A lot of what Elizondo found remains classified, The Sun reported, which restricts exactly what the former Pentagon insider could reveal. However, he did identify geographical ‘hot spots’ that emerged for these recent sightings: Nuclear facilities and power plants, Elizondo revealed.

He also talked about the foundation of the AATIP program, which was started after strange footage in 2004  involving two U.S. Navy pilots chasing an unexplained object that maneuvered in a way previously unheard of.

Tasked to intercept an object off the coast of California in a F/A-18F Super Hornet fighter jet, Commander David Fravor described the incident to The New York Times.

“It accelerated like nothing I’ve ever seen,” he said, revealing that the incident left him, “pretty weirded out.”

You can see the declassified footage from the 2004 incident here —

What is YOUR opinion on this? Vote here —