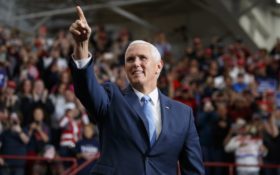 U.S. Vice President Mike Pence will visit Japan next week to discuss North Korea and other issues ahead of two key regional meetings.

Japan’s Chief Cabinet Secretary Yoshihide Suga announced Thursday that Pence will hold talks with Prime Minister Shinzo Abe and other top officials during his visit on Monday and Tuesday.

Suga said Pence’s visit will be an “ideal opportunity” for the two sides to discuss North Korea, China and other regional issues and reaffirm their cooperation.

Pence may meet with his counterpart, Finance Minister Taro Aso, trade talks are not expected to be on the agenda.

With Democrats now in control of the House as a result of Tuesday’s midterm elections, President Donald Trump is expected to face a tough test of whether he can compromise with opposition lawmakers on key policies.

Suga, however, said Japan’s alliance with the U.S. is unwavering regardless of the election results, and pledged Tokyo’s commitment to continue cooperating with Washington.

Pence is to attend a meeting of the Association of Southeast Asian Nations in Singapore and a subsequent summit of the Asia-Pacific Economic Cooperation in Papua New Guinea on behalf of President Donald Trump.