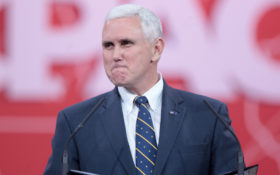 Vice President Mike Pence said there’s one key issue that should alarm conservatives heading into the election – but it’s not the one getting much attention in the mainstream media.

It’s not the coronavirus, the economy, China, Russia, TikTok, or mail-in voting.

Pence says the conservative majority is in jeopardy due to the apparent defection of Chief Justice John Roberts to the liberal side of the bench.

“Look, we have great respect for the institution of the Supreme Court of the United States,” Pence told David Brody of the Christian Broadcasting Network. “But Chief Justice John Roberts has been a disappointment to conservatives — whether it be the Obamacare decision, or whether it be a spate of recent decisions all the way through Calvary Chapel.”

The Calvary Chapel Pence referred to was a decision last month ruling against religious exemptions for coronavirus occupancy restrictions.

And longtime court-watchers noted it was part of an emerging pattern of 5-4 decisions in which Roberts joins forces with the court’s liberal wing to reach a majority. Politico notes it has happened on cases ranging from immigration to abortion to LGBT issues.

“That’s a very modest restriction on abortion providers, but a narrow majority in the Supreme Court still said it was unacceptable,” Pence said. “And I think it’s been a wake-up call for pro-life voters around the country who understand, in a very real sense, the destiny of the Supreme Court is on the ballot in 2020.”

And as the vice president notes, that means the upcoming election will be crucial to the future of the court.

Five members of the Supreme Court are over 70 and two are over 80 (Justices Stephen Breyer at 81 and Ruth Bader Ginsburg at 87).

Given that the average retirement age of Supreme Court justices is 73.6, that’s five seats the next president could potentially fill.

Pence said the situation today is a stark reminder of the last election.

“We remember the issue back in 2016, which I believe loomed large in voters’ decisions between Hillary Clinton and the man who became president of the United States.”

Senate Majority Leader Mitch McConnell, R-Ky., blocked any confirmation hearings, saying that in the case of a vacancy in an election year, the voters should get to decide who fills the seat.

Sure enough, with all the issues on the line in that year’s election, the court became one of the most important for conservatives.

Trump has held one of the most transparent Supreme Court selection processes on record, releasing a list of vetted names known for their conservative beliefs and extensive legal histories.

The list has been revised, but for the most part voters know exactly who may be on the court next.

With former Vice President Joe Biden, there’s no such list – and conservatives suspect it’s because he plans to nominate activist liberal judges both to the Supreme Court and to the federal bench throughout the nation.

And that means voters aren’t just choosing a president in November.

They’re choosing the next generation of the Supreme Court and the direction it will take for decades to come.