Pence arrives in Japan to discuss N. Korea ahead of summit - The Horn News 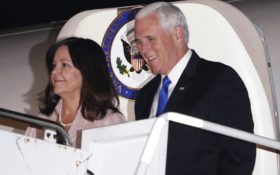 U.S. Vice President Mike Pence arrived in Tokyo on Monday to discuss North Korea and other issues with Japanese officials before heading to two regional summits.

During a stopover in Alaska, Pence told reporters that he planned to “talk about our important alliance, our economic relationship, current negotiations for a free trade agreement of course, and we’ll be focusing on our ongoing commitment to the denuclearization of the Korean Peninsula,” Japan’s NHK public television reported.

Pence said in a recent opinion piece in the Washington Post that America will soon begin negotiations for “a historic trade agreement with Japan.”

The two countries agreed in September to start negotiations on a bilateral trade agreement. Talks are expected to begin early next year.

President Donald Trump’s administration has reached a trade pact with South Korea and another with Mexico and Canada. Pence said in the article that the new trade deals “will put American jobs and American workers first.”

Pence also stressed American commitment to the security and prosperity of the Indo-Pacific region to keep it free and open. He said the U.S. will continue to put diplomatic and economic pressure on North Korea and urged all Indo-Pacific nations to keep the pressure campaign and sanctions in place until the complete denuclearization of North Korea is achieved.

Pence is to leave Tuesday to attend a meeting of the Association of Southeast Asian Nations in Singapore and an Asia-Pacific Economic Cooperation summit in Papua New Guinea on behalf of Trump.

Japanese Chief Cabinet Secretary Yoshihide Suga told reporters Monday that Pence’s visit ahead of the regional meetings is a “perfect chance to reaffirm cooperation between Japan and the United States regarding our policies on North Korea and various other issues of mutual interest.”

He said Pence and Abe will discuss ways to expand trade and investment between the two sides.

Japan has faced demands that it reduce its trade surplus with the U.S. and is also concerned about the impact of Trump’s trade war with China.