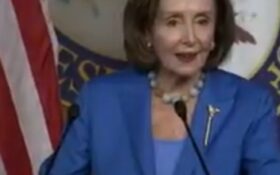 House Speaker Nancy Pelosi held her weekly press conference on Tuesday. She seethed at the reporters… even worse than usual.

“Our latest CBS News poll shows that only ten percent of Americans describe themselves as knowing a lot of specific things that are in the reconciliation package and that the majority don’t know anything at all,” Killon observed. “So do you think you need to do a better job at messaging?”

Pelosi quickly, defensively replied, “Well, I think you all could do a better job of selling it – to be very frank with you,” she said.

Pelosi wants the press to report more on the contents of the bill and less about the price tag of $3.5 trillion.

Without pause, she continued, “Every time I come here, I go through the list: family and medical leave, climate, the issues that are in there.”

Rep. Alexandria-Ocasio Cortez has made a similar criticism about the press coverage of the bill. Take a look —

The media focus on hazy topline numbers is a gift favoring the tiny # of holdouts.

It lets them get away w/ saying “oh I want X trillion, not Y” instead of actual positions- “cut childcare” or “I want to block making Rx drugs affordable”

People should know what they want to gut https://t.co/vc5YBgH3jd

Responding to CBS News poll showing most Americans don't know specifics of Democrats' spending bill, Pelosi tells @NikolenDC "it is hard to break through when you have such a comprehensive package"

"Whether they know it or not, they overwhelmingly support it," she says pic.twitter.com/G0wQLFR6Ju

Some observers have accused Pelosi of asking the press to do her own job.

Others have criticized the social spending package as a “kitchen sink” bill. These critics have accused the Democrats of addressing too many different issues in the same bill, without prioritizing.

Naturally, it’s difficult for journalists to report on the contents of a bill with too many different provisions. Pelosi herself acknowledged this difficulty during her press conference.

She said, “It is true, it is hard to break through when you have such a comprehensive package.”

Then, at long last, she answered the question. She spoke about her plans to educate the American people by naming the more well-known provisions in the bill.

For example, one of the things in the bill is the continuation of the Biden tax credit that is – Child Tax Credit – that is in the, was in the Rescue Package. That has great appeal. Do people know where it springs from? No.

But it is a vast bill. It has a lot in it. And we’ll have to continue to make sure the public does.

But whether they know it or not, they overwhelmingly support it.

Pelosi antagonized a different reporter earlier in the conference. Look that this excerpt from the transcript —

Speaker Pelosi.  I mean, there are a lot of questions here.

Q:  Do you believe you will get this done this month still?  And also on the debt limit, are you still of the view that you should not do this as part of reconciliation?

Speaker Pelosi.  I did tell you that, didn’t I?

Speaker Pelosi.  Well, you asked me, and you forgot.  You said, ‘Are you going to do it in reconciliation?’ and I said, ‘No.’

Q:  Well, it’s only extended for about a month.

The Democrats are clearly struggling with this bill. As the negotiations drag, the bill’s fate remains uncertain.