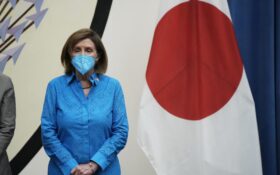 Throughout her visit to Asia this month, House Speaker Nancy Pelosi has continued her streak as a gaffe machine — and her strange Benjamin Franklin video is going viral.

At a press conference after meeting with Taiwanese President Tsai Ing-wen, Pelosi incorrectly referred to founding father Benjamin Franklin as a U.S. president.

Benjamin Franklin once served as president of Pennsylvania, an office abolished in 1790. However, he was never a U.S. president.

During her speakership, Pelosi has kneeled in a kente cloth, and she’s told her colleagues, “We have to pass [Obamacare] so that you can find out what is in it.”

Meanwhile, Pelosi seems to be trying to conceal her own mistake.

While speaking to the media in Taiwan on Tuesday, House Speaker Nancy Pelosi appeared to reference the Benjamin Franklin presidency. pic.twitter.com/zWMke05pya

The speaker said Friday that China will not be able to isolate Taiwan by preventing U.S. officials from traveling there. She made the remark in Tokyo as she wrapped up an Asia tour highlighted by the visit to Taipei that infuriated Beijing.

Beijing has tried to isolate Taiwan, including by preventing the self-governing island from joining the World Health Organization, Pelosi said.

“They may try to keep Taiwan from visiting or participating in other places, but they will not isolate Taiwan by preventing us to travel there,” she said, defending her trip that has escalated tensions in the region.

Pelosi said her visit to Taiwan was not intended to change the status quo for the island but to maintain peace in the Taiwan Strait, which separates Taiwan and mainland China. She praised Taiwan’s hard-fought democracy and success in technology and business, while criticizing Chinese violations of trade agreements, weapons proliferation and human rights problems, including the ongoing genocide of its Muslim Uyghur minority.

“If we do not speak out for human rights in China because of commercial interests, we lose all moral authority to speak out about human rights any place in the world,” Pelosi said in a news conference. “China has some contradictions — some progress in terms of lifting people up, some horrible things happening in terms of the Uyghurs. In fact, it’s been labeled a genocide.”

Pelosi said “the two big countries” — the United States and China — must communicate in areas such as climate and other global issues. “It isn’t about our visit determining what the U.S.-China relationship is. It’s a much bigger and longer-term challenge and once again, we have to recognize that we have to work together on certain areas.”

China announced Friday that it is canceling or suspending dialogue with the United States on a range of issues from climate change to military relations and anti-drug efforts in retaliation for Pelosi’s visit. It also announced unspecified sanctions on Pelosi and her family. Such sanctions are generally mostly symbolic in nature.

China, which claims Taiwan and has threatened to annex it by force if necessary, called Pelosi’s visit a provocation and on Thursday began military drills, including missile strike training, in six zones surrounding Taiwan, in what could be its biggest since the mid-1990s.

Pelosi, the first House speaker to visit Taiwan in 25 years, said China launched the “strikes probably using our visit as an excuse.”

Days before Pelosi’s Taiwan visit, a group of senior Japanese lawmakers, including former Defense Minister Shigeru Ishiba, visited the island and discussed regional security with Taiwanese President Tsai Ing-wen. Ishiba said Japan, while working with the United States to prevent conflict in the Indo-Pacific, wants a defense agreement with Taiwan.

The Chinese military exercises launched Thursday involve its navy, air force and other departments and are to last until Sunday. They include missile strikes on targets in the seas north and south of the island in an echo of the last major Chinese military drills in 1995 and 1996 aimed at intimidating Taiwan’s leaders and voters.

Taiwan has put its military on alert and staged civil defense drills, while the U.S. has numerous naval assets in the area.

China also flew warplanes toward Taiwan and blocked imports of its citrus and fish.

China sees the island as a breakaway province and considers visits to Taiwan by foreign officials as recognizing its sovereignty.

The Biden administration and Pelosi have said the United States remains committed to a “one China” policy, which recognizes Beijing as the government of China but allows informal relations and defense ties with Taipei. The administration discouraged but did not prevent Pelosi from visiting.

Pelosi has been to China before. She, along with other lawmakers, visited Beijing’s Tiananmen Square in 1991 to support democracy two years after a bloody military crackdown on protesters at the square.

As leader of the House of Representatives, Pelosi’s trip has heightened U.S.-China tensions more than visits by other members of Congress. The last House speaker to visit Taiwan was Newt Gingrich in 1997.

China and Taiwan, which split in 1949 after a civil war, have no official relations but multibillion-dollar business ties.