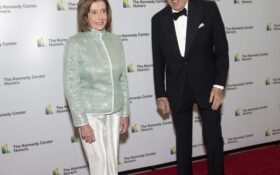 According to the report, the Pelosi family has access to the security footage from the night and are planning to review it. Critics are demanding the public be allowed to see video of the attack in order to quell growing speculation and rumors.

“Paul remains under doctors’ care as he continues to progress on a long recovery process and convalescence,” the House speaker tweeted. “He is now home surrounded by his family who request privacy.”

Law enforcement officers who responded to the break-in early last Friday say they witnessed Paul Pelosi being struck in the head with the hammer at least once, according to court documents. Officials said the assault was captured on the officers’ body cameras.

The Pelosi family will able to view the body camera footage and listen to the 911 call, an insider told CNN on Tuesday.

San Francisco District Attorney Brooke Jenkins claims to have seen the body camera footage. “You do see him get attacked on that footage,” Jenkins said, according to The Independent.

In a state court filing, prosecutors detailed the attack in stark terms, saying Paul Pelosi, 82, was knocked unconscious by the hammer attack and woke up in a pool of his own blood.

The public can read a court document summarizing the 911 call, but has yet to listen to the original audio or see the body camera or security footage.

“There are no plans to release the body cam footage prior to court proceedings,” a spokesperson for the San Francisco Police Department told The Independent.

Conservative commentator Megyn Kelly has demanded to see the footage. She some of her allies have controversial theories about the attack.

“Let’s see it all,” Kelly reportedly said Monday. “I don’t know what went on. I know enough to smell a rat. There’s something going on here that they’re not telling us. I just don’t know what it is.”

The USCP said it has access to roughly 1,800 cameras, including one on Pelosi’s house that was not being monitored during the attack on Paul Pelosi because the speaker was not there.

According to the official account, the Capitol Police video is expected to show an extended struggle by the intruder, David DePape. First to break into the Pelosi house through a smashed window in the rear of the home and then as he moved around to break glass in doors on the side of the house.

David DePape, the alleged attacker, legally entered the United States in 2000 and later left the country and returned a few times, including entering in March 2008 at San Diego’s San Ysidro border crossing, said a U.S. official who spoke on the condition of anonymity because they were not authorized to discuss the matter.

Most Canadians are not required to obtain a visa to enter the U.S. as tourists and can stay for up to six months. The official said it was unclear why U.S. authorities admitted DePape after he overstayed his entry in 2000.

The Department of Homeland Security acknowledged in a statement that DePape was allowed into San Diego from Tijuana on March 8, 2008, but didn’t immediately address any other entries.

U.S. officials have long struggled to quantify — let alone track down — people who enter the country legally but overstay visas, believed to be about 40% of the population of illegal immigrants.

There were 684,499 visa overstays from October 2019 through September 2020 among visitors who arrived by plane or ship — more than the population of Vermont or Wyoming – according to the Department of Homeland Security’s latest annual report. The total number of overstays is much larger but has not been quantified because it doesn’t include how many people arrive by land, the primary way for Canadians and Mexicans to enter the United States.

The cost and technological hurdles to develop a checkout system at congested land crossings with Canada and Mexico are enormous. In the 12-month period through September 2020, more than 52,000 Canadians who came to the U.S. by air or sea had overstayed their legally authorized entry.

Despite the challenges, the U.S. official said DePape’s overstay should have been noted in immigration records, which, in theory, should have prevented authorities from admitting him.