PC outrage! "The Simpsons" to be changed because of liberal anger - The Horn News 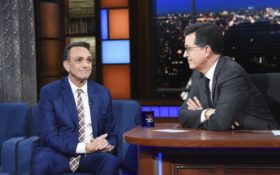 Hank Azaria is ready to stop voicing Kwik-E-Mart owner Apu on “The Simpsons” in the wake of criticism that it’s a stereotype.

Azaria said on Tuesday’s “The Late Show with Stephen Colbert” that he hopes the Fox animated show makes a change, and he’s willing to step aside if necessary.

Azaria said: “I’m perfectly willing and happy to step aside or help transition it into something new. I really hope that’s what ‘The Simpsons’ does.”

He added: “It just feels like the right thing to do.”

The show has been on for 28 years, and if it was the right thing to do, why did he ever accept the role? Azaria is only acknowledging the harm done by his Indian character because of the politically correct responses he has received.

People of South Asian heritage have criticized the heavily accented Apu for reinforcing stereotypes they say lead to bullying and self-loathing. Azaria said it makes him sad if anyone was bullied because of Apu. He said he “wanted to spread laughter and joy with this character.”