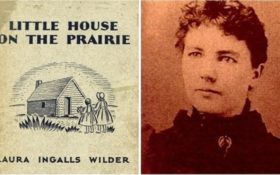 One of the most iconic names in classic American literature has just fallen victim to the ugly sword of political correctness.

“Little House” author Laura Ingalls Wilder – whose beloved books have sold some 60 million copies since the first was published in 1932 – was just unceremoniously dumped by the American Library Association.

The Laura Ingalls Wilder Award, aka the Wilder Medal given for children’s literature, will now simply be called the Children’s Literature Legacy Award.

“Wilder’s books are a product of her life experiences and perspective as a settler in America’s 1800s,” the organization sniffed in a statement. “Her works reflect dated cultural attitudes toward Indigenous people and people of color that contradict modern acceptance, celebration, and understanding of diverse communities.”

Her books also teach the importance of persistence, resilience and perseverance, not to mention traditional family values.

Are they dated in some ways? Absolutely.

So is Shakespeare, for that matter.

Born less than two years after the Civil War ended – and raised on the very prairies she wrote about – Wilder is the product of another era, and some of the characters in the semiautobiographical novels reflect that.

But since when is honoring an author an endorsement of every line in a book?

This used to be known as a “teachable moment,” a chance for families to enjoy the stories while also using them to show kids how times and values have changed and – hopefully – improved.

Instead, they’re just taking a hatchet to the award and chiseling her name off it in another effort to whitewash history and appease liberals.

What’s next? The “problematic” works of Theodor S. Geisel, aka Dr. Seuss, a previous winner of the Wilder Medal?

Don’t laugh — he’s already been called out by the PC left!

One of his murals was pulled from his own museum out of PC concerns, and last year a Massachusetts librarian rejected a donation of “Cat In The Hat” books from first lady Melania Trump, which are just two of the indignities the late author has endured.

Dr. Seuss taught peace, tolerance and the value of getting along inspite of differences.

At the end of the day, so did Wilder.

While there are some dated passages about Native Americans – including a character who infamously declares that “the only good Indian is a dead Indian” – there is also a distinct call for tolerance and coexistence.

One comes straight from the character who is often the moral center of the stories.

“Pa… figured that Indians would be as peaceable as anybody else if they were left alone,” she wrote.

She also depicted the acceptance of an African American character in a way that wasn’t very common at the time.

“Then the doctor came. And he was the black man. Laura had never seen a black man before and she could not take her eyes off Dr. Tan. He was so very black. She would have been afraid of him if she had not liked him so much. He smiled at her with all his white teeth. He talked with Pa and Ma, and laughed a rolling, jolly laugh. They all wanted him to stay longer, but he had to hurry away.”

These are the inclusive values that made the series such a classic enjoyed by generations. They were also reflected in the long-running “Little House On The Prairie” TV series, which broadcast more than 200 episodes (and multiple specials) over the course of more than a decade.

Now, it’s in danger of being wiped out, and some critics aren’t having it.