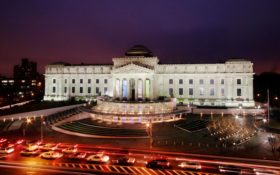 A young woman in New York has become a target for left-wing outrage… simply for accepting a job offer!

Kristen Windmuller-Luna was hired as a curator for the Brooklyn Museum’s 6,000-object African art collection, setting off a firestorm of politically correct angst by leftists on social media.

It’s not because she isn’t qualified, she has a Ph.D. in African art history from Princeton University and is a lecturer at Columbia.

It’s because of the color of her skin.

She is white, and the PC far-left seems to think no white person should ever hold a job in African art. As a result, Windmuller-Luna is being attacked – often viciously – on social media by people who’ve never met her, don’t know her and couldn’t care less about her qualifications and abilities.

Her only crime? To study African art, and then to get a job in the field she is clearly so passionate about.

She should be considered an ally.

Instead, she’s being told by critics that a real “ally” would quit. Brittany Williams, who describes herself as an “organizer and artist,” urged Windmuller-Luna to demand that a person of color take her place.

Williams even called on her readers to punish the museum by cancelling memberships, writing letters and making calls, and included a “script” to use when calling.

BET columnist Ernest Owens called this young woman a “cultural colonizer” as he slammed her on Twitter.

Seriously, @brooklynmuseum? There goes the neighborhood for good. https://t.co/Ssdt4FUofI

Most of her critics come from social justice warriors hiding behind keyboards.

People in the field… including people of color… have defended Windmuller-Luna.

Because there are only a small handful of African Americans who work in the field, “all have jobs better than this one,” Nelson added on Twitter.

African art scholars in the US are overwhelmingly white and female. Given this situation and given that the very few POC in the field all have jobs better than this one, I find myself unable to manufacture any outrage over this.

He called Windmuller-Luna “richly deserving” of the job.

Prof. Chika Okeke-Agulu at Princeton – one of Windmuller-Luna’s teachers – said he “fully supports” her hire, and warned that this kind of outrage could kill interest in the field among anyone who isn’t black.

“Do I think that museums should only hire black curators to oversee their African art collections?” he wrote on his blog. “Absolutely not; or we might as well prevent non-black students from studying or seeking a career in the field.”

Indeed, you’d have to wonder just how far critics of the move think that museums need to go.

If Windmuller-Luna isn’t qualified because she is a white American, would a white South African be qualified? How about an Arab from Egypt? A French Tunisian?

And what happens if you try to apply the same standard to other parts of the museum. Can an African-American curate the Asian exhibits? Could a Japanese-American curate an exhibit on Chinese art?

While we’re at it, we may as well wonder if adults can run a children’s museum… or if humans can manage a zoo.

Step aside, zookeepers. A true “ally” of animals would put bears and bunnies in charge!

Windmuller-Luna has not spoken out about the controversy, no doubt knowing that any comment would simply lead to more attacks. The museum is standing by her, but issued a statement to its critics.

“We are listening and we hear you,” they wrote.

We are listening and we hear you. Please find our response about our recent curatorial appointments below. For more information, please see our press release: https://t.co/qs3uCxIgt9 pic.twitter.com/nVI8CTyC4g

It’s not enough; even a statement of commitment to diversity was slammed.

“You’re not listening. You don’t hear us,” one critic replied on Twitter. “And if at this point you feel like you’re still justified, you’re part of the problem #colonialmentality #yourracismisshowing.”