PC FREAK OUT! Student throws a fit over... history!? - The Horn News 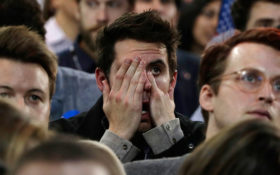 A student at Columbia University in New York – one of the nation’s oldest institutes of higher learning, which produced no less than five Founding Fathers – is up in arms over the “n” word.

It’s not the “n” word you’re thinking of.

This kid is livid over the use of the word “negro” in the historically accurate context as part of classroom discussion of the 1950s and 1960s.

Student Maria Fernanda Martinez told The Columbia Spectator she was disturbed when her professor in an American studies seminar said it would be fine to use the word within the context of the period.

Indeed, it’s almost impossible to talk about the period without it.

It’s used more than a dozen times in Martin Luther King Jr.’s “I Have A Dream” speech!

Do you have this “banned” book? It could save your life… [sponsored]

But this student was so disturbed she fired off an email to her professor, Todd Gitlin, griping about the offensive nature of the word.

He didn’t change his approach, and she responded as only a millennial can.

“I didn’t pay attention in class after that,” Martinez told The Spectator.

The professor isn’t backing down.

“It is in fact true, a matter of historical record, that African Americans in the ’50s and ’60s wanted to be called ‘Negroes,’” he told the newspaper via email. “Denying that practice would be a falsification of history.”

Indeed, unlike the other “n” word, negro wasn’t used as an insult. It was for a time considered the normal, correct and even preferred word – and while it is antiquated and even offensive today, it’s still around.

The United Negro College Fund, for example, still exists. The U.S. Census lists “Black, African-American, or Negro” on its question about race, knowing that some older black Americans still prefer the term.

And if you love baseball, don’t just visit Cooperstown for your history fix. Visit Kansas City and see the Negro Leagues Baseball Museum, one of the best sports museums of any kind in the nation.

Beyond the word itself is the absurd nature of the accusation – because the guy being accused here isn’t some insensitive sociopath or even someone just trying to push his students’ buttons.

In what has to be one of the great ironies of “social justice,” the very man being slammed over his use of the word is actually a true warrior of the left from the turbulent 60s.

Gitlin played a key role in the battle for civil rights, protested the Vietnam War, and led protests of U.S. corporations that do business with South Africa in the apartheid era long before it became a celebrity-backed cause.

Looks like the leftist revolution is devouring its own!