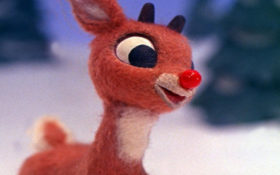 The liberal news outlet, Huffington Post, is up in arms over a Christmas television classic — “Rudolph the Red-Nosed Reindeer” — for their “seriously problematic” and “marginalized reindeer.”

In a clip posted to the HuffPost Twitter page, the liberal outlet cited sexism and bullying as the reasons that viewers are starting to notice that the Christmas classic is “not so jolly after all.”

The HuffPost‘s video claims that viewers are beginning to share their negative observations of the reindeer film online, adding tweets from social media users.

“Yearly reminder that #Rudolph the Red-Nosed Reindeer is a parable on racism & homophobia w/Santa as a bigoted exploitative prick,” read one tweet. “Santa’s operation is an HR nightmare and in serious need of diversity and inclusion training. #Rudolph,” read another tweet.

The clip goes on to claim that Rudolph’s father clearly verbally abused him by ordering him to wear a fake nose and that it was problematic for Santa to berate Donner for his son’s nose.

The video even suggests that the reindeer school coach encouraged bullying.

HuffPost‘s effort to place a negative association on the film did not take well with my social media users.

“This 54yr old children’s movie teaches lessons of acceptance, equality, forgiveness, perseverance. It teaches people not to be judgmental, it teaches it’s ok to be & to accept those different from yourself. All lessons people could still learn today. That’s hardly problematic,” wrote one Twitter user.

Even President Donald Trump’s son weighed in on the discussion, saying, “Liberalism is a disease.”

Liberalism is a disease. https://t.co/zerLtQYIon

Rudolph is not the only classic film that has been criticized recently. “Charlie Brown Thanksgiving” was slammed by critics for “for seating its only black character, Franklin, alone on one side of the holiday table.” Many social media users reacted on Twitter by calling the cartoon racist.

If politically correct Americans ever got their way, all of our favorite holiday classics would be erased forever.