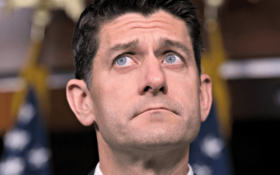 It is no secret that Fox News Personality Lou Dobbs does not like House Speaker Paul Ryan — and has even told him “to get out of the way” of someone who deserves his position more.

On Friday night, Dobbs asked the pressing question on Twitter, “Do you believe it’s time for speaker Paul Ryan to step aside immediately in favor of a conservative who embraces the Trump agenda that can lead Republicans to victory in the midterms?”

#LDTPoll: Do you believe it’s time for speaker Paul Ryan to step aside immediately in favor of a conservative who embraces the Trump agenda that can lead Republicans to victory in the midterms?

With over 26,000 Twitter users weighing in, Americans have signaled they’re eager for Ryan to vacate his leadership position — and for President Donald Trump to get the help he needs.

On April 12, Dobbs asked his viewers on “Lou Dobbs Tonight,”“Why would he not resign the speakership? He’s a lame duck speaker, he’s a lame duck congressman now. What use is he as speaker and what is he––what is he thinking in terms of the good of the party, assuming that it remotely does occur to him?”

“He is a jeopardizing seat,” Dobbs went on to say.

Americans have agreed with Dobbs and believe that it is time for Ryan to go. Ninety-six percent of Americans voted that they would like for Ryan to step aside.

Only 4% disagreed and would like for Ryan to stay in his position until his retirement.

Twitter users expressed their concern and disappointment with Ryan —

Why overdue, the RINOs time has been done for a while now, he should have never been made speaker…

He’s going to stay there to help out pelosi

@SpeakerRyan just a poll you should maybe take into consideration. ????

America has spoken, and the results do not lie — it is time for Ryan to step aside and allow a conservative to step up and lead Republicans to a midterms victory.