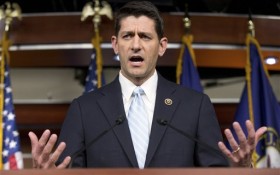 Paul Ryan is stepping down after three rocky years as Speaker of the House – but he’s facing a nightmare: a full-blown rebellion from his party’s grassroots.

“I support Kevin McCarthy. Everybody knows that,” Ryan said at a press conference last Thursday.

But conservative champion Jim Jordan of Ohio has announced he’s running for Speaker – because Ryan and his friends failed to live up to their big talk on the campaign trail.

“I plan to run for Speaker of the House to bring real change to the House of Representatives,” Jordan wrote in a letter to his fellow congressmen.

Ryan, and former Speaker John Boehner, ran on these issues, but Jordan says when it was time for action, “We didn’t even have that debate. We simply forfeited and did what the swamp always does.”

And Ryan – a favorite of the party’s wealthy donors – won’t like Jordan’s other pledge: If he’s elected, he’s going to help President Donald Trump do his job.

“President Trump has taken bold action on behalf of the American people. Congress has not held up its end of the deal,” Jordan wrote. “It’s time to do what we said.”

Trump was the first Republican to carry Ryan’s home state of Wisconsin since former President Ronald Reagan – but Ryan has dragged his feet, stalled Trump’s agenda and called the president out publicly several times.

Jordan “would succeed where Speaker Ryan failed,” according to FreedomWorks President Adam Brandon. Jordan is “far removed from the corrupt Washington establishment” and “a man committed to draining the Swamp.”

“Almost more than anyone else out there, he’s had the president’s back,” Brandon said.

One of Trump’s top supporters in Congress, Matt Gaetz of Florida, said that “Jim Jordan’s a fighter. And to get the Trump agenda into law, I think we need a fighter in the Speaker’s chair.”

And if Jordan holds the top spot in the House, he and Trump might just partner up to put former Secretary of State Hillary Clinton, former President Barack Obama and their syndicate behind bars.

National Review notes that Jordan “doggedly has pursued Obama’s White House, State, Justice, and the FBI through the Benghazi, Servergate, and Russiagate probes.”

“I do not want to see Nancy to come back as Speaker,” McCarthy said at a conference over the weekend. “I want the next Speaker to come from California, but I don’t want it to be Nancy.”

McCarthy and Ryan, along with former Congressman Eric Cantor, called themselves “the Young Guns,” and made a clumsy attempt to appeal to the grassroots. But Cantor got bounced out of office in 2014 by Dave Brat, for seeming too elitist and out-of-touch with his Virginia district. Cantor’s now an investment banker.

Now Ryan is quitting, too – and conservatives say McCarthy offers more of the same.

“If you want Congress to remain paralyzed because of partisan politics, then McCarthy is your man for Speaker,” said Andrew Roth, vice-president of government affairs of the conservative Club for Growth.

Either McCarthy or Jordan would be better than Pelosi – but the two have some major differences. Jordan scored a perfect 100% on the grassroots conservative Heritage Action voter scorecard; McCarthy got only 41%. Jordan also got a perfect 100% from the American Conservative Union to McCarthy’s 78%.

Jordan has a track record going all the way back to his years as a state representative in conservative northwestern Ohio. Tea Party Patriots Chairman Jenny Beth Martin said that “Rep. Jordan has been a solid, constitutional conservative warrior for years.”

“It’s clear that conservatives agree that Jim Jordan, a proven conservative, is the ideal leader to replace Paul Ryan,” according to the Senate Conservatives Fund, led by Ken Cuccinelli.

The Swamp isn’t exactly lying down, though. They accused Jordan of ignoring reports of sexual abuse while he was assistant wrestling coach at Ohio State University.

Fifteen former wrestlers came to his defense saying Jordan is “a very honest and ethical person” and knew nothing of the abuse, which happened more than 20 years ago.

“It’s kind of weird this story is coming out now when Ohio Republican Rep. Jim Jordan’s name has become prominent in talks of who should be the next Speaker of the House,” wrote Mary Chastain at Legal Insurrection.

Jordan says he isn’t worried about phony allegations.  “I’ve talked to all kinds of colleagues. They can all see through that story,” he said.