Paul Ryan sends a message to the GOP - The Horn News 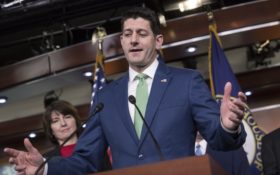 House Speaker Paul Ryan is privately warning Republicans of a “bit of a wake-up call” as Democrat Conor Lamb edged past the Republican in the Pennsylvania special election.

Ryan told House Republicans on Wednesday they need to “get to work,” fundraise and not be caught off guard heading into a midterm campaign season where Democratic enthusiasm is real. That’s according to two people familiar with Ryan’s remarks, who spoke on condition of anonymity because they weren’t authorized to speak publicly.

Publicly, Ryan was more upbeat, blaming the Pennsylvania outcome in a Trump-heavy district on Lamb’s centrist views. Ryan says, “you’re not going to see repeated” in November, as Republicans try to retain their majority.

Ryan urged colleagues to tout the GOP-passed tax plan and to remind voters Democrats opposed it.