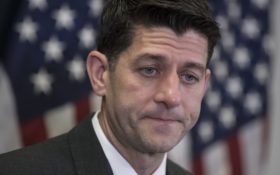 Republican House Speaker Paul Ryan will not run for re-election, people close to the Wisconsin lawmaker said Wednesday. The Horn News previously reported that the top GOP lawmaker decided on the move months ago — a report his office had previously denied.

Ryan’s plans have been the source of much speculation amid Republican concerns over keeping their majority in the House of Representatives. Ryan had made tax cuts a centerpiece of his legislative agenda, and Congress delivered on that late last year.

A Republican from Janesville, Wisconsin, Ryan was first elected to Congress in 1998 and became speaker in 2015 after former House Speaker John Boehner retired. He was former GOP presidential nominee Mitt Romney’s running mate in 2012.

Ryan and his wife have three children.

A spokesman for Republican House Speaker Paul Ryan says he will serve out his term before retiring in January.

Brendan Buck, counselor to the speaker, says the “the speaker is proud of all that has been accomplished. He said Ryan is ready to devote more of his time to being a husband and a father.”

Buck says Ryan will discuss his decision at a news conference Wednesday.

Buck says that while Ryan did not seek the position of speaker, “he told his colleagues that serving as speaker has been the professional honor of his life, and he thanked them for the trust they placed in him.”