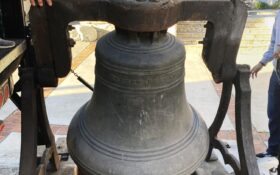 A bronze bell cast in 1834 in Paul Revere’s Massachusetts foundry is coming home — capping a nearly two-century, cross-country odyssey that saw it hauled by oxcart to churches in Ohio before languishing for decades in a California garage.

After a weeklong journey across the U.S., the historic bell is being returned Friday to the site where it was created 188 years ago, said Kiley Nichols, a spokesperson for the Paul Revere Heritage Site in Canton, just south of Boston.

The museum said the 1,000-pound (453-kilogram) bell was made by the Revolutionary War patriot’s son, Joseph Warren Revere, who took over his father’s foundry in 1804.

In 1984, real estate agent Jeannene Shanks became the bell’s accidental owner. She’d helped broker the sale of what once was First Congregational Church in Vermilion, Ohio, to a fitness center — but the gym didn’t want the heavy bell, and Shanks didn’t feel good about it being scrapped. She made a $1,000 donation to the church in exchange for the bell, which earlier had adorned the belfry of the First Presbyterian Church of Cleveland.

When Shanks and her husband, Robert, retired in Chino Hills, California, they hauled the bell with them.

“It became the joke of the family,” said Shanks’ daughter, Amy Miller, 66, a psychologist in Chino Hills. “They’d open the doors to the garage and ring the bell every Fourth of July. People would look at it and say, ‘What the heck is that?’”

After their parents’ deaths, Miller and her 69-year-old brother, retired Ford Motor Co. executive Robert L. Shanks Jr. of Miami, moved the bell to Miller’s garage, where it’s sat since 2009.

A collector in Texas offered $50,000 for the bell, which bears Revere’s imprimatur. But after he casually mentioned he’d melt it down if he decided not to keep it, the siblings spurned the offer.

Miller did some online sleuthing, figured out where the bell was forged, and decided to donate it to the Massachusetts museum so the public could view and appreciate it.

“I don’t need a bell in my garage, and this bell has a story of its own,” she said. “It represents what our history and our country are all about. I wanted it to go beyond us — to go back to where it started. We’re the keepers of our history.”

Local historian George Comeau, a board member of the Revere & Son Heritage Trust Corp., which operates the museum, said few of the hundreds of bells the Reveres produced are in private hands — and most are hidden from public view.

Police in Canton planned early Friday to ceremonially escort the truck carrying the bell to the Paul Revere Heritage Site, a sprawling 9-acre facility that preserves Revere’s legacy. Revere, an entrepreneur and innovator, is credited with launching the U.S. copper industry after the war.

Revere is best known for his famed midnight ride from Boston to Lexington on April 18, 1775, warning the Colonial militia that British forces were coming.

His backup plan — lighting either one or two lanterns as signals from the steeple of Boston’s Old North Church — is immortalized in a line in “Paul Revere’s Ride,” a Henry Wadsworth Longfellow poem: “One if by land, and two if by sea …”

Nearly two and a half centuries later, Revere still fascinates. In 2017, archaeologists excavated what they believe was the site of an outhouse next door to his home in Boston’s North End.