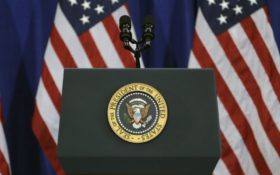 Billionaire and former New York City Mayor Michael Bloomberg must be bored out of his mind.

Because he doesn’t seem to have anything better to do than serve as a constant thorn in President Donald Trump’s side.

And Bloomberg doesn’t mind looking like a total hypocrite, as long as it allows him to get under Trump’s skin.

In his latest political flip-flop, Bloomberg is now reportedly considering running for president in 2020.

And he’ll run under a new party affiliation… again.

In an appearance Monday on television gab-fest The View, Bloomberg said he’ll start seriously considering a presidential run early next year — as a Democrat.

“Well, you’d only run if you could get the Republican or the Democratic nomination. Obviously, the Republican is probably not going to be available, and I don’t agree with almost everything they stand for today,” Bloomberg said. “And so it would have to be the Democratic nomination. And if you want to run that’s what you’d have to do. And I don’t know, I’ve looked at it and I’ve said at the beginning of the year we’ll focus on it.”

With a net worth in excess of $50 billion, Bloomberg certainly has the cash to mount a campaign. But his constantly shifting political allegiances have become almost comical.

Bloomberg had been a Democrat before registering as a Republican to run for New York City mayor in 2001. Then, in 2009, he ran as an independent.

And only Bloomberg would have the arrogance to think he could win a Democratic primary with suspect credentials as a party member.

Bloomberg tried to buy some credibility with the Democratic Party by working to elect Democrats in the 2018 midterm elections. But it’s unlikely that he could even win a primary in his home state of New York.

Bloomberg’s possible run seems like his latest effort to antagonize Trump. He’s disagreed publicly with Trump on everything from border security to gun control.

And squaring off with Trump in 2020 would be a dream scenario for Bloomberg.

Just don’t expect Bloomberg to make it that far.