[Hilarious video] Parrot screams "Let me out!" as cops respond - The Horn News 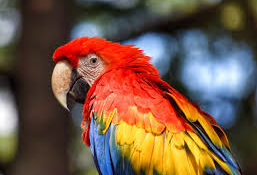 When someone in a Florida neighborhood heard chilling cries and the words “Let me out!” they dialed 911.

Little did they know the cries were that of a 40-year-old parrot named Rambo.

After the call, four Palm Beach County Sheriff’s deputies pulled up and questioned a man who appeared to be repairing a car in his driveway. The Palm Beach Post reports that when the deputies explained their concerns, the man smiled, then told deputies he’d introduce them to the perpetrator. When he returned with the parrot, the deputies burst out laughing.

The man told officers that he taught Rambo to scream “Let me out!” when he was a kid and Rambo lived in a cage.

PBSO officials could not be reached for more details. The agency did tweet a link to a video Saturday, saying, “Our deputies in Lake Worth Beach came to the help of someone screaming for help. Hilarity ensued.”

Our Deputies in Lake Worth Beach came to the help of someone screaming for help. Hilarity ensued. https://t.co/6fO5n3OkxC