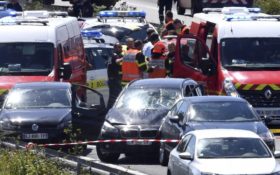 A man suspected of ramming his car into French soldiers has been transferred to a Paris hospital but remains too badly injured to face questioning or prosecution.

A judicial official said the man was brought to the capital Friday by helicopter from a hospital in Lille, and was not in a condition to speak to investigators.

The official said no other arrests have been made over Wednesday’s attack, which injured six soldiers. The official was not authorized to be publicly named.

Police have identified the chief suspect as 37-year-old Algerian Hamou Benlatreche, known to police as a suspect in minor crimes but not as someone with radical beliefs. Benlatreche was arrested in northern France and police said officers opened fire to subdue him.

The motive for the attack remains unclear, although the case is being investigated as a terror attack.