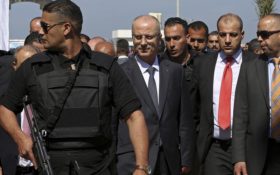 An explosion struck the convoy of the Palestinian prime minister on Tuesday as he was making a rare visit to Gaza, in what is being called an assassination attempt that his Fatah party is blaming on Hamas.

The blast further complicated what already is a troubled reconciliation process between Gaza’s ruling Hamas militant group and the Palestinian Authority in the West Bank. It also cast a cloud over a meeting later Tuesday at the White House, where international representatives were to discuss economic development and the dire humanitarian situation in Gaza.

The explosion went off shortly after the convoy entered Gaza through the Erez crossing with Israel.

Palestinian Prime Minister Rami Hamdallah was unharmed and went on to inaugurate a long-awaited sewage plant project in the northern part of the strip.

Witnesses said the bomb was planted under an electric pole on Gaza’s main north-south road and went off shortly after Hamdallah’s 20-vehicle convoy had entered through the Israeli-controlled crossing.

“I could not see anything because smoke and dust filled the air. When the smoke cleared, the explosion was followed by heavy gunfire, apparently from police securing the convoy. When the dust cleared, I saw people running everywhere, and police were running around,” said a witness who declined to be identified because of security concerns.

Two vehicles were badly damaged and could not continue while at least four others were damaged, with windows or sunroofs blown out. One had signs of blood on the door. At least two bodyguards were lightly wounded.

Hamdallah, who is based in the West Bank, arrived in Hamas-run Gaza to inaugurate the internationally funded sewage plant. He delivered a speech, and immediately left without sticking around for the ribbon-cutting ceremony.

“This will not deter from seeking to end the bitter split. We will still come to Gaza. If I did not need to travel tomorrow, then I would stay in Gaza for several days,” he said.

Hamas condemned the explosion, calling it a crime and an attempt to “hurt efforts to achieve unity and reconciliation.” It promised an “urgent” investigation.

In the West Bank, President Mahmoud Abbas blamed Hamas for the blast. But his security chief Majed Farraj, who was in the convoy, said it was “too early” to say who was responsible.

Hanan Ashrawi, another senior Palestinian official in the West Bank, condemned the “cowardly act” and said the perpetrators must be brought to justice.

“We believe that this act targeted also all attempts at creating Palestinian unity, putting an end to the rift or the division in Palestine,” she said.

The rival factions have been trying to reconcile since 2007 when Hamas seized control of Gaza from Fatah forces. The takeover left the Palestinians with two rival governments, Hamas in Gaza and the Western-backed Palestinian Authority governing autonomous enclaves in the Israeli-occupied West Bank.

In November, Hamas handed over control of Gaza’s border crossings to the Palestinian Authority. It was the first tangible concession in years of Egyptian-brokered reconciliation talks. But negotiations have bogged down since then.

Hamdallah’s visit comes amid a time of crisis in Gaza. The economy has been devastated by three wars between Hamas and Israel, and a decade-long blockade by Israel and Egypt meant to weaken the militant group.

Amid warnings of a looming humanitarian catastrophe, the White House was hosting a gathering of international representatives Tuesday to discuss economic development projects and the dire situation.

Hamas is sworn to Israel’s destruction, and the U.S., Israel and other Western allies consider Hamas a terrorist group. White House envoy Jason Greenblatt has blamed Hamas for wreaking devastation on the territory.

“The challenge will be determining which ideas can be realistically implemented in light of the fact that the Palestinians of Gaza continue to suffer under the authoritarian rule of Hamas,” he said in a statement.

The United Nations Mideast envoy also condemned the attack, calling it a “grave incident” whose perpetrators should be brought to justice.

Nickolay Mladenov said until the “legitimate” Palestinian Authority takes power in Gaza, Hamas is responsible for enabling the internationally backed government to work without fear of intimidation, harassment and violence.

The sewage plant in question was envisioned in 2007 after overburdened sewage reservoirs collapsed, killing five villagers.

The World Bank, European Union and other European governments have paid nearly $75 million in funding. The Hamas takeover, the ensuing Israeli-Egyptian blockade, power shortages and conflicts delayed the opening of the project for four years.

Besides the old reservoirs, the plant will receive wastewater from four towns and villages. After treatment, the water will be transferred for irrigation and the remainder will be safely dumped to the sea.