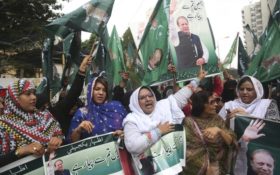 Pakistan’s lower house of parliament on Tuesday elected veteran lawmaker Shahid Khaqan Abbasi as the country’s new prime minister, a loyalist of outgoing Nawaz Sharif, who was disqualified by the Supreme Court for concealing assets.

Abbasi, a member of the ruling Pakistan Muslim League party, got 221 votes in the 342-member National Assembly. His closest rival Syed Naveed Qamar from the opposition Pakistan People’s Party secured 47 votes, according to Ayaz Sadiq, the National Assembly Speaker. Sheikh Rasheed Ahmed, a lawmaker from the Pakistan Tehreek-e-Insaf party, founded by cricketer-turned-politician Imran Khan, got 33 votes.

Hours later, Abbasi was sworn in to his office at the presidency palace in the capital, Islamabad. President Mamnoon Hussain administered the oath of office to him at a ceremony which was attended by leaders from the ruling party, diplomats, bureaucrats and senior military official.

Abbasi replaced the 67-year-old Sharif, who was disqualified by the top court Friday for concealing assets — specifically, that his son’s Dubai-based company listed a monthly salary for him. Sharif claimed he never received any of that money.

Sharif’s party wants Abbasi to serve as an interim premier for 45 days or until Sharif’s younger brother, Shahbaz Sharif, the chief minister of Punjab province, wins a national assembly seat in a by-election.

The opposition has criticized this intention as dynastic and undemocratic, criticism that Abbasi rejects.

Abbasi also dismissed the corruption allegations against Sharif as baseless and said he hoped the deposed premier would return to parliament soon. He said the people of Pakistan did not accept Sharif’s disqualification, and vowed to follow in the footsteps of Sharif.

Abbasi was jailed by the former military dictator Pervez Musharraf for not testifying against Sharif following a 1999 bloodless coup in which Sharif’s elected government was overthrown. Sharif and his family were subsequently exiled to Saudi Arabia.

On Tuesday, Abbasi said he would ensure rule of law in Pakistan. He stopped short of criticizing the judiciary, saying legal experts were surprised by the decision to disqualify Sharif and that no one was willing to accept it. He said Sharif was victimized for putting Pakistan back on the path of progress and bringing in foreign investments worth billions of dollars to Pakistan.

He also said Sharif was able to attract foreign investment because he was an honest person.

Abbasi said he would ensure the rule of law and that he would run the country strictly according to the constitution.

Sharif’s party has said it will file a petition with the Supreme Court next week asking for a review of its decision to disqualify him.

Abbasi’s rival candidates Qamar and Ahmed congratulated him on becoming the new prime minister and hoped that he would ensure political stability in Pakistan, which has faced political turmoil and militancy since Sharif came into power after in 2013.

Sharif’s party says it will remain in power until the next general elections are held in June 2018.

Meanwhile, a female lawmaker from Khan’s party on Tuesday quit the party, calling the party leader a “characterless person.”

Ayesha Gulalai Wazir posted a tweet saying the honor of female party members was not safe because Khan had an “immoral character.”