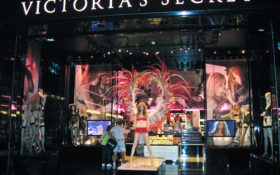 Lower Allen Township police say an 18-year-old woman and a juvenile they aren’t naming entered the store at the Capital City Mall near Harrisburg on April 7. Police say the juvenile acted as a lookout as Aida Melcado took panties from a table and from drawers and stuffed them in a bag.

Police tell WPMT-TV that they took about 2,000 pairs.

Police say the two were identified by officers performing a drug investigation in Fairfax, Virginia, less than two weeks later. Melcado and the juvenile also were in possession of stolen merchandise from a Victoria’s Secret store in Bethesda, Maryland, and both were charged.

An arrest warrant was issued Friday for Melcado involving the Pennsylvania theft. A contact number for her wasn’t listed. It wasn’t clear if she has a lawyer to comment.