Oxford professor: Aliens are on Earth interbreeding with humans - The Horn News 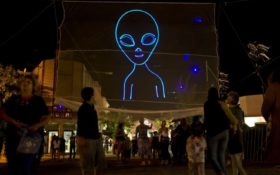 A professor from the prestigious Oxford University has a warning that sounds straight out of a B-list Hollywood movie.

Alien lifeforms are on Earth, Dr. Young-hae Chi told students. The professor at Oxford’s Oriental Institute says they’re abducting human beings as a response to climate change — and they’re going to save the world.

And his wacky prediction only gets weirder.

“In his fifty-five minute presentation he cited Dr. David Jacobs, an ‘abduction researcher’ in the US, who argued that aliens’ primary purpose is to colonize the earth, by interbreeding with humans to produce a new hybrid species,” The Oxford Student reported. “Second generation ‘hybrids’ are, according to Jacobs, walking unobserved among us.”

In his new book titled, “Alien Visitations and the End of humanity,” written in Korean, Chi reportedly has identified four types of aliens: Small, tall, scaly and snake-like, and insect-like.

“Dr. Chi believes the insect aliens may be in charge and give orders to the other types,” The Sun reported. “The aliens exist in their own bio-system that humans cannot experience because our perception is limited by our organs, the professor has claimed.”

Chi believes the aliens are here to save us from climate change and other problems on Earth.

“It may be more or less assumed that the hybrid project is a response to this impending demise of human civilization,” Chi said.

You can see the wild lecture yourself here —