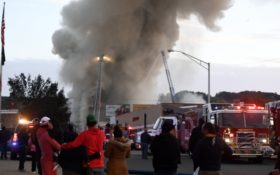 More than 100 people are homeless after a fast-moving fire ripped through the business district of a New Jersey town, destroying multiple businesses.

Firefighters remain on the scene Tuesday hours after the blaze broke out in the basement of a luncheonette in downtown Dover Monday afternoon.

The fire, fed by natural gas, spread quickly to surrounding structures in the town about 30 miles (48 kilometers) west of New York City.

No one was injured, but six businesses were destroyed and two buildings collapsed.

Dover Mayor James Dodd calls it devastating. Dodd says the community was in the middle of developing the downtown area and the fire couldn’t have come at a worse time.