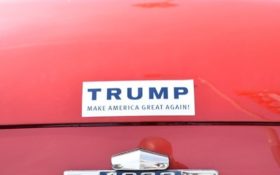 A Massachusetts woman was reportedly taken into police custody on Monday after she allegedly slammed into a man’s car because he had a President Donald Trump sticker on the back of his car.

The woman, Chloe Wright, was arrested for a hit-and-run on June 30.

The man who was hit reportedly contacted Barnstable Police Department and explained that the woman was honking her horn at him while they sat at a red light.

The police report explained that she continued to honk and when they had reached the next red light, she began to shout at the man.

The man feared that something was wrong with his car so he reportedly stepped out and at that point he recalled that the woman was shouting at him over his bumper stick in support of Trump.

“She said, ‘You voted for Trump?’” the man recalled her saying. “I said yes. She called me a racist and several other names.”

According to the man, the crazed liberal woman then re-positioned her car to get ready to ram into his.

After hitting his car, the woman sped off from the scene of the crime.

“She bent my door and I had to lean back to avoid getting hit,” the man reportedly said. “She also hit the side of my car.”

Luckily, the man had an eyewitness — his girlfriend.

His girlfriend was able to back up his description of the incident and roughly a month later, police were able to track down the disturbed woman.

Wright plead guilt and was freed on a $1,250 bond. She was also charged with vandalizing property and leaving the scene of property damage.

Karma always catches up to you, let this be a sign to all crazy liberals out there.

They are not above the law.