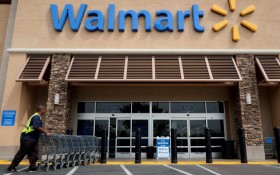 Veteran Manual Griffin has been selling memorial “buddy poppies” for over 20 years at his neighborhood Walmart in Dickson City, Pennsylvania every May, rain or shine.

The money Griffin raises benefits the Veterans of Foreign Wars — but this year he was forced out of a Wal-Mart while fundraising… into the pouring raining.

A photo went viral on Facebook after Griffin’s wifem Maryann Griffin shared that her husband was forced to sit outside the store during a rainstorm to sell his memorial items.

The “buddy poppies” sold by Griffin are created by disabled or needy veterans in Veterans Affairs hospitals across the United States, and he has a passion for selling them.

“As it was pouring rain, he was told he couldn’t stay at the protected area and that he would have to go out in the rain and 15 feet away from the building as per the store manager,” Maryann explained in a Facebook post on Friday.

The photo shared by Maryann showed her husband sitting outside in the rain with his hands folded, donning a military uniform.

Over 6,300 people had shared the now-deleted photo as of Monday evening.

“Way to go WALMART….commendable way to treat our veterans who fought for your freedom…..Disgrace,” Maryann continued, adding that the photo was sent to her by a passerby who “obviously felt the same.”

Thousands of Americans commented on the photo agreeing that Walmart’s actions were a “disgrace” and called for a boycott of that store location.

“Regardless of what he was selling or for whom, they had regularly allowed him to do so. Basic human kindness should have stepped in here. Thanks for his service, both in the past and in the present!” one Facebook user wrote.

“All American stores and restaurants are getting ridiculous with their policies. People grow up these could be our fathers, mothers, sisters, brothers or grandparents that fought in the wars. They could be related to anyone of us and we allow our fellow man to degrade them like this. I’m getting more ashamed of you all,” another added.

Griffin is not a man trying to scam shopper. He is trying to make a difference for those in need. He faithfully served out country and deserves our respect.

Griffin’s friend explained, “He is going to do what he has to do for his VFW, and he wants to make sure he is representing them the same way we did when we wore the uniform.”

Reportedly, the store manager explained he was just following store policy implemented 2 years ago. Responding to pressure, he did agree to provide Griffin with a canopy outside in case of bad weather.

HAPPY ENDING: Walmart followed through and put a canopy up outside for veterans in Dickson City.
Original Story: After Photo of Veteran Sitting in the Rain Goes Viral, Walmart Makes Amends https://t.co/IAYd0BCJwF @WNEP pic.twitter.com/TAv33fmsiF

“Thank you for the overwhelming support to our veterans and the disrespect shown at a local Walmart,” Maryann wrote on Saturday. “Thank you again for your wonderful response and support!”

According to the VFW, “The VFW Buddy Poppy program provides compensation to the veterans who assemble the poppies, provides financial assistance in maintaining state and national veterans’ rehabilitation and service programs and partially supports the VFW National Home For Children.”

Griffin, along with every other veteran, deserves an overwhelming amount of respect and admiration. No veteran should be left outside in the rain after he puts his life on the line for our country.

It is time for Walmart to step up and issue this veteran a heartfelt apology for their disgraceful act.