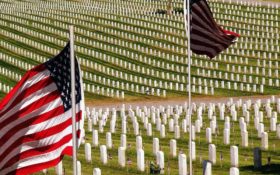 Raymond Ibrahim, a Coptic/Islamic relations expert who has briefed the U.S. Strategic Command, the Defense Intelligence Agency, Congress, and other government agencies, was slated to speak at the U.S. Army War College in Carlisle Barracks on June 19th.

The Library of Congress Arabic language and Middle East regional specialist was a perfect fit for the College. “I am honored to invite you to speak as part of the U.S. Army Heritage and Education Center’s 2019 Perspectives in Military History Lecture Series,” the January invitation read. “We would like you to speak about your new book, ‘Sword and Scimitar: Fourteen Centuries of War between Islam and the West.’ …I think your topic will be perfect for my audience.”

From January to the end of May, all was peaceful and Ibrahim’s lecture was a go. Then, the far-left Council on American-Islamic Relations (CAIR) heard about it and raised a stink.

And the War College surrendered.

The U.S. Department of Justice specifically lists CAIR as a “co-conspirator” in the largest terror funding case in American history. The FBI has evidence linking CAIR to the radical Islamic terrorist group Hamas. CAIR was exposed as a Muslim Brotherhood front in court.

The bottom line is, CAIR is a jihad-associated group that pretends to work for peace, but in reality is nothing but a propaganda front for Islam.

The Center for Security Policy summarizes, “CAIR is a nefarious, anti-American organization and should have absolutely NO influence on any decisions made by, for or at the War College.”

On May 28th, CAIR wrote to Commandant Gen. John Kem and Provost Dr. James Breckenridge at the War College, telling them to cancel Ibrahim’s lecture because they think his book is “deeply troubling.” Without a single citation or any evidence at all, they accused the book of being “inaccurate.”

Professional historians and scholars specializing in the field of Muslim-Western history disagree. There’s been praise over the accuracy and research behind Ibrahim’s book. One is America’s leading military historian, Victor Davis Hanson, who calls the book, “first-rate military history and a product of solid scholarship and philological research.”

“The history I present in Sword and Scimitar is ironclad, verifiable, and beyond well documented; with about a thousand endnotes, it is heavily based on primary sources, many of which are Muslim, and from eyewitnesses,” Ibrahim matter-of-factly states. But the real issue is, “the history presented in Sword and Scimitar proves everything that groups like CAIR exist to suppress.”

Ibrahim was repeatedly assured his appearance at the War College was still on. On June 5th, he received an official communiqué that “we are good to go for the lecture.”

Then CAIR upped the ante. Having no rational ammunition, they created a hysteria campaign based on complete lies and libelous slander. They labeled Ibrahim, who is a non-white Arab-American from Egypt – a “white supremacist.”

On June 6th, CAIR and its sister Islamicist group MPower Change told the mainstream media that Ibrahim was an “Islamophobe” who holds “racist views” and accused the U.S. military of being “racist” and the War College of “endorsing and fostering anti-Muslim hate” and “dangerously nurturing Islamophobia and white nationalism.”

Their campaign worked. The Western Journal wrote that initially CAIR was ignored, but when they cried, ‘Islamophobe!’ they got Ibrahim “kicked to the curb.”

On June 10th, the U.S. Army War College caved in pressure and dropped Ibrahim. The College claims they only “postponed” the lecture.

“For the War College suddenly to postpone a long-planned event only nine days before schedule –and just a handful of days after CAIR’s smear campaign—is not a coincidence,” Ibrahim said. “It is a clear message for all.”

The Washington Times reported, “After CAIR organized a publicity campaign alleging Mr. Ibrahim was a white nationalist, the college buckled to the group’s pressure.”

After he was told the U.S. Army War College was uninviting him, Ibrahim offered to factually spar with Islam’s greatest defender. “I suggested a compromise,” he said. “Turn my lecture into a debate, and pit me against any academic of CAIR’s choosing.”

But the military college rejected the compromise.

“Of all the colleges that should be throwing off the gloves in a fight for freedom of speech and the open exchange of ideas, one would think the United States Army War College would be first in line,” the Clarion Project commented.

True to the nature of bullies, once the Army gave in, CAIR pushed and shoved for more. They demanded the Army College “repudiate” and publicly “reject” history critical of Islam, and called for an Islamicist to lecture to the U.S. military.

After throwing Ibrahim under the bus, the Army War College added insult to injury by announcing they will host “another historical perspective.”

“The grand lesson of this entire debacle should be disheartening for all who care about this nation,” Ibrahim reflected. “If an ethnic Egyptian and native speaker of Arabic, with verifiable credentials, can be characterized by Islamist groups with terror links as a ‘racist’ and ‘white nationalist’; and if, of all places, the U.S. Army War College, as opposed to the average ‘liberal’ college, can so easily capitulate to such patently deceptive tactics, know that the hour is late indeed.”

Father Mark Hodges is a reporter for The Horn News