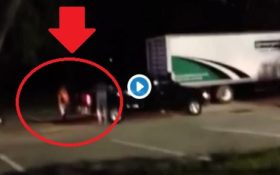 An army of political lawyers are descending on both Florida and Arizona — and Florida Gov. Rick Scott says there’s evidence of “rampant fraud” that should be concerning to every American.

Scott, whose lead in his senatorial race has shrunk to a razor-thin margin, has asked for investigators to probe why two heavily Democratic counties in Florida have reportedly both “found” tens of thousands of extra votes… over two days after the 2018 midterm election finished.

One of these places, Broward County, was described by The Miami Herald as one of “the most controversial elections department” in Florida.

What concerned citizens and Republican officials have uncovered in the past two days is shocking.

On Thursday, footage of poll workers illegally transferring thousands of ballots from their personal vehicles into the back of rental trucks, with no legal oversight, surfaced.

Critics wondered if these ballots were on their way to be destroyed… or replaced.

Caught On Video: Concerned citizen sees ballots being transported in private vehicles & transferred to rented truck on Election night. This violates all chain of custody requirements for paper ballots. Were the ballots destroyed & replaced by set of fake ballots? Investigate now! pic.twitter.com/GUPZnz7Gny

That same day, an elementary school teacher said she found a provisional ballot box left in a school closet.

In Broward County, Miramar Elementary School teacher Lakeisha Sorey came across a box labeled “Provisional ballots” left behind at the school from Election Day & she’s concerned it might have votes. She didn’t look in the box because she didn’t want to tamper with it pic.twitter.com/x8WOa8tfKz

While they continue to turn in thousands of new votes, both Broward and Palm Beach County election officials have refused to release data on how many total votes were cast in their districts — a violation of Florida election law.

“Broward and Palm Beach counties are still finding and counting ballots. The people of Florida deserve fairness and transparency, and the supervisors are failing to give it to them,” Scott said Thursday evening.

The Broward County Board of Elections Supervisor, Brenda Snipes, is no stranger to election fraud allegations. Snipes was convicted in 2016 of illegally destroying ballots in the Democratic primary, according to The National Review. Snipes was allegedly destroying the ballots to favor Democratic Rep. Debbie Wasserman Schultz over liberal challenger Tim Canova. Schultz won by less than 7,000 votes.

Snipes was also accused of illegally refusing to remove dead voters from her county’s election rolls earlier this year. She has refused to comment to questions on where the tens of thousands of additional ballots have come from, and how many she thinks are left.

“Brenda Snipes and the rest of her crew at the Broward County Supervisor of Elections do not deserve any presumption of impartiality, honesty, integrity, or competence. Snipes illegally destroyed the ballots cast in my 2016 primary against Debbie Wasserman Schultz,” Canova told The Gateway Pundit.

“For months, I have been calling for criminal investigations. I have warned that Snipes is a serial election rigger who would rig the recent elections. I do not believe in the accuracy of any election returns reported out of Broward County,” Canova added.

The governor has asked Florida law enforcement to investigate the suspected election fraud, and his campaign filed an emergency lawsuit in retaliation.

“I will not stand idly by as unethical liberals try to steal this election from the great people of Florida,” Scott told reporters.

His campaign has filed a lawsuit demanding that election officials release their ballot totals. The suit was filed through the National Republican Senatorial Committee.

“Two days after voting has concluded, the Supervisor Of Elections is unwilling to disclose records revealing how many electors voted, how many ballots have been canvassed, and how many ballots remain to be canvassed. The lack of transparency raises substantial concerns about the validity of the election process,” Scott’s lawsuit said.

“An emergency hearing is necessary as the Canvassing Board is obligated to submit the unofficial elections results to the Division of Elections by noon November 10, 2018,” the lawsuit stated.

“Voter confidence in the sanctity of the ballot box is a cornerstone of our Republic,” Republican spokesman Jose Oliva said. “Palm Beach county, as well as Brenda Snipes and Broward county’s ‘discovery’ of tens of thousands of allegedly valid, uncounted ballots is disturbing to say the least.”

Scott remains just 0.21 points ahead of his opponent as of Thursday morning.