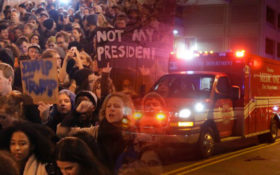 When radical leftist protesters block the highway, they’re not only causing a major inconvenience. They’re endangering lives, critics have long warned – and in New Haven, Connecticut this weekend, they almost killed a person.

Authorities say more than a hundred angry anti-Trump protesters blocked a highway as a statement against the president’s immigration policy, and knowingly blocked an ambulance carrying a critically ill patient.

A crowd of hundreds chanted and carried the banner of “No Ban No Wall New Haven,” in downtown New Haven on Saturday, furious with President Donald Trump’s executive orders to ban potentially dangerous refugees from entering the United States without extreme vetting.

The crowd marched to Route 34, a major highway, at approximately 4:30 p.m. and blocked traffic – which included an ambulance rushing a critically ill patient to the hospital.

When police responded and attempted to move the protesters, they informed the crowd their actions were endangering an ill person.

Despite this, protesters fought the police efforts to restore order, Shift Commander Lt. Sam Brown told The New Haven Independent, and officers were forced to tackle and arrest one man. “The officers tried to guide him out of the way. He pushed an officer trying to get back.”

“The protesters were in the process of being cleared from the highway, but not before they obstructed an ambulance carrying a critically ill patient. Due to this delay ambulance personnel were required to perform an emergency medical procedure in the ambulance instead of at the hospital,” the police said in a written statement.

This isn’t the first time protesters have endangered the lives of innocent people with their extreme tactics. In July, Black Lives Matter protesters in Memphis trapped a car with a child having a medical emergency, forcing the responding paramedics to go 25 minutes out of their way to get to the hospital.

Critics of these actions are increasingly calling for authorities to intervene and stop these highway protests before they kill someone.