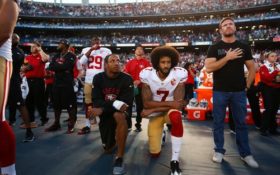 When Colin Kaepernick inspired hundreds of millionaire NFL players to disrespect the American flag every Sunday, fans responded with boos.

When the players refused to stop their dishonorable protests, fans began to boycott the league.

If critics thought the NFL had learned their lesson, though, the leagues executives proved this week that they hadn’t. In fact, they’re not only refusing to listen.. they’ve doubled-down on the insults to our troops.

Not only has the league refused demands that NFL players who kneel be punished, they actually jumped into more liberal nonsense.

In other words, the NFL is beginning to support so-called “social justice” to appease their players — and they’re using their fans money to do it.

“We felt that this was an issue over the last months, as we have continued to work with our players on issues of equality and on issues of criminal justice reform, that was surfaced for us, and we thought it was appropriate to lend our support to it,” NFL spokesman Joe Lockhart told reporters, according to The Daily Caller.

While the bill enjoys bi-partisan support, the fact that a football league would wade into the political landscape to appease it’s players is outrageous.

First, it’s a popular bill. But this is a political slippery-slope the NFL has found itself on.

What happens when emboldened liberals start demanding the NFL contribute to Planned Parenthood or the Clinton Foundation?

As for the NFL kneeling controversy, league executives at the fall meeting didn’t change the rules. In fact, they didn’t even discuss the protests.

The subject “did not come up” at the meetings, Dolphins owner Stephen Ross told reporters.

It seems the NFL boycott isn’t going to end soon.

Should NFL players be fired for kneeling?