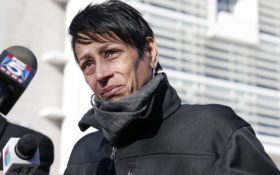 A mother recognized by President Donald Trump for turning grief over her daughter’s suspected gang killing into a crusade against MS-13 was buried Friday. She was murdered at her own daughter’s memorial after an argument. Mourners remembered the mother as a hero and a warrior.

According to The New York Post, Rodriguez was setting up flowers at her daughter’s vigil on Sept. 14 when she was confronted by a woman in a car. That woman, authorities say, fatally struck Rodriguez with her car.

“The world has lost a great warrior,” Sini told mourners at St. Anne’s Roman Catholic Church in Brentwood. “Evelyn was as strong a person as I’ve ever met.”

Rodriguez, 50, was struck and killed by an SUV on Sept. 14 after a heated confrontation with the driver over the placement of a memorial to her slain daughter, Kayla Cuevas. Rodriguez and another person were seen standing in the street and exchanged words with the driver of the SUV before the vehicle sped forward and struck her.

Rodriguez was killed two years to the day after Cuevas’ beaten, slashed body was found. Cuevas and her friend, 15-year-old Nisa Mickens, were walking when police say they were ambushed by MS-13 gang members, all illegal immigrants. Mickens’ body was found a few hundred feet away near an elementary school.

“You will be stopped,” Hochul said. “Your evil will be thwarted at every step, because you have lit a fire under this community. That will be the enduring legacy of what Evelyn accomplished in the name of Kayla and other victims of gang violence.”

The driver of the SUV that killed Rodriguez wasn’t hurt. She remained at the scene and called 911. Police have not released the driver’s name — even though doing so is common practice — citing the investigation.

Rodriguez spoke out against the gang and the local school district after Cuevas and Mickens were attacked with machetes and baseball bats. The girls’ alleged killers, who were arrested along with about a dozen other suspected MS-13 members, are facing murder charges that could result in the death penalty.

Rodriguez filed a $110 million lawsuit last December against the Brentwood School District, claiming it ignored warnings that MS-13 members were threatening Kayla. Rodriguez said that employees failed to act when told that the girl was being threatened. The lawsuit says the bullying went on for two years before the teenager was killed.

MS-13, or the Mara Salvatrucha, is blamed for dozens of killings on Long Island since 2016. Trump has blamed the violence on lax immigration policies.

Rodriguez stood with Cuevas’ father, Freddy Cuevas, and Mickens’ parents at the State of the Union in January and sat alongside Trump and King at a gang violence forum in May on Long Island.

“My daughter, Kayla, was a beautiful girl,” Rodriguez said at the forum. “She had dreams, and they took that away from her. That’s not right. And how these kids were murdered, tortured, is unacceptable.”